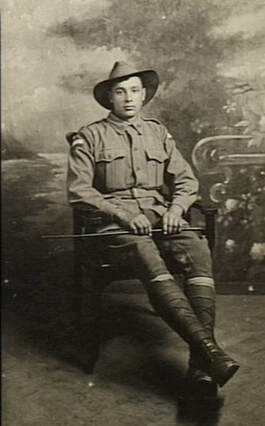 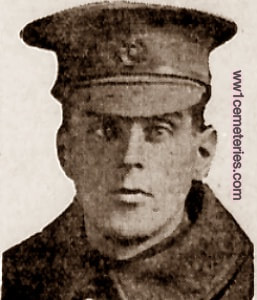 Son of Andrew and Katherine Baxter, of Aberdeen, Scotland. 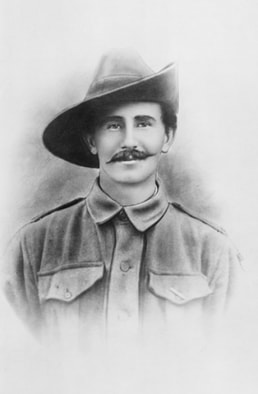 
Son of Henry and Margaret Ann Biggin. Native of Tasmania.

Studio portrait of 150 Private (Pte) Hugh Richard Biggin, 11th Battalion, of Pingelly, WA. A farmer before enlisting in August 1914, Pte Biggin left Australia as an original 11th Battalion member in November 1914 and served on Gallipoli and the Western Front. He was with a lewis gun section at Mouquet Farm when he was killed instantly by a German shell. 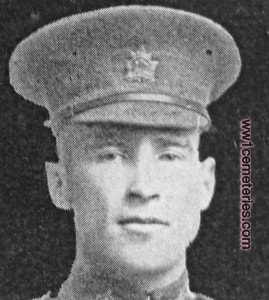 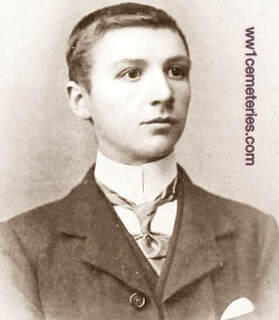 ​William Blaikie belonged to "D" Coy. Scouts and during the second attack on Pozieres on 18th August 1916 he was sent on a message with another scout called Aldridge, Aldridge got through with his message despite being wounded. William Blaikie's  body was later found in No Man's Land, he had been killed by a shell. 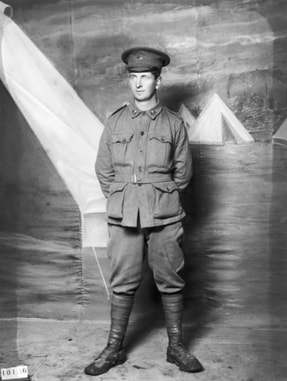 Son of Daniel and Eliza Breward, of Westbury, Tasmania.

Studio portrait of 2015 Private (Pte) William Breward, 3rd Reinforcements, 26th Battalion, of Westbury, Tas. Pte Breward enlisted on 25 June 1915 and embarked from Melbourne aboard HMAT Makarini on 10 September 1915. He was killed in action on 5 August 1916 North East of Albert, France. 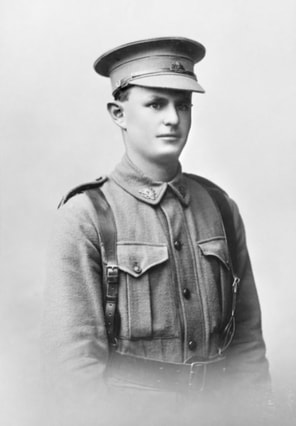 Studio portrait of Second Lieutenant (2nd Lt) James Monteagle Brown, 25th Battalion. A produce store manager from Warwick, Queensland, prior to enlistment on 2 August 1915, he embarked from Brisbane aboard HMAT Wandilla on 31 January 1916 for Egypt. The battalion relocated to the Western Front, France, during March 1916. 2nd Lt Brown was killed in action at Pozieres on 29 July 1916. 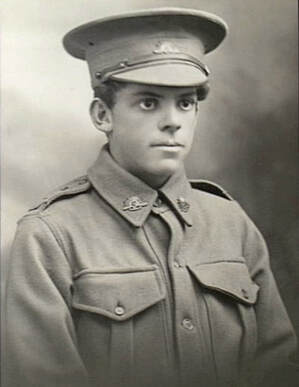 Studio portrait of 2429 Private (Pte) Frederick Jasper Browning, 1st Battalion, of Randwick, NSW. A glass worker prior to enlistment, Pte Browning embarked with the 7th Reinforcements from Sydney on HMAT Orsova on 14th July 1915. He was killed in action on 28th July 1916 and was buried in the Courcelette British Cemetery, France. 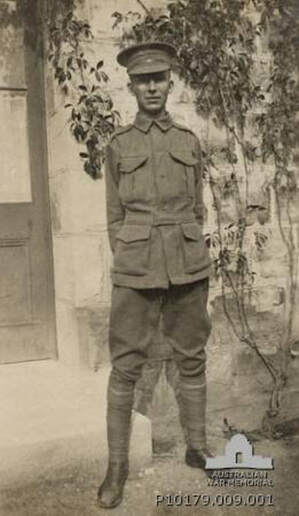 Informal outdoor portrait of 1519 Private (Pte) Richard Farley Bulkeley. A licensed surveyor from Wallerawang, NSW, he embarked with the 3rd Battalion from Sydney aboard HMAT Seang Choon (A49) on 11 February 1915. While serving on Gallipoli, Pte Bulkeley was promoted to Lance Corporal in November 1915, and then to Corporal in December of the same year. Transferred to France, he was promoted to 2nd Lieutenant in January 1916 and finally to Lieutenant (Lt) in June 1916. He was awarded a Military Medal for gallantry and bravery for his actions in Pozieres on 24 July 1916. Lt Bulkeley was killed in action in France on 17 August 1916. 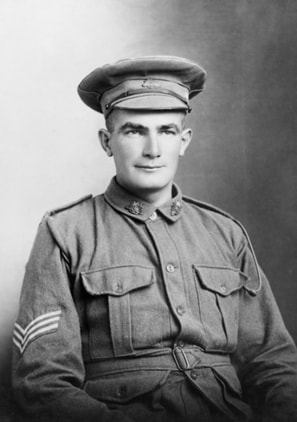 Son of John and Martha Campbell, of Wesley Vale, Tasmania.

Studio portrait of 4623 Acting Sergeant (A/Sgt) William Wallace Campbell, 14th Reinforcements, 12th Battalion, of Wesley Vale, Tas. A/Sgt Campbell enlisted on 10 August 1915 and embarked aboard HMAT Warilda in Melbourne on 8 February 1916. He was serving as a lance corporal when he was killed in action at Mouquet Farm, France, on 19 - 22 August 1916. 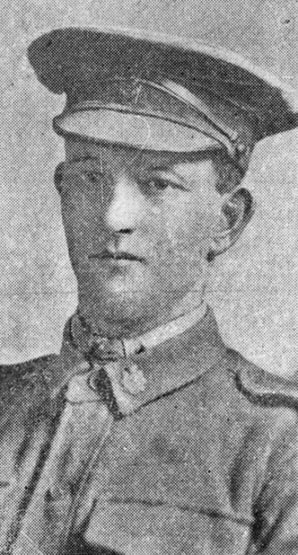 Inscription "In Memory Of Our Dear Son & Brother An Australian Hero"

Studio portrait of 3799 Private Charles Clifton Chappell 22nd Battalion, of Yarrawonga, Vic. Son of Alfred Moffatt Chappell and Sarah Chappell. A carpenter prior to enlisting on 21 August 1915 he embarked from Melbourne aboard HMAT Warilda (A69) on 8 February 1916.
​
2393 Private, E. H. Seccull gave this account of Charles Chappell's death;

"About 8 a.m., on the 5th of August on the ridge at Pozieres. We were holding the trenches at the time. He was killed by a bullet which went right through his steel helmet and killed him outright. I don't know what happened to his body." 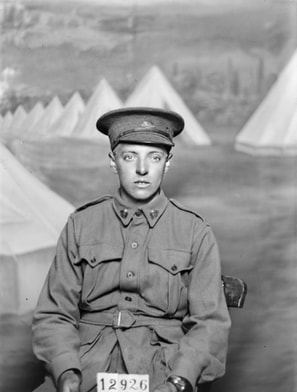 Inscription "Our Loved Only Son & Brother Faithful Unto Death"

Studio portrait probably of 4161 Private (Pte) Gordon Herbert Cleaver, 13th Reinforcements, 7th Battalion, of Traralgon, Vic. A shop assistant prior to enlisting on 12 July 1915, he embarked from Melbourne aboard HMAT Demosthenes on 29 December 1915. Pte Cleaver was killed in action on 21 August 1916, at Mouquet Farm, France, whilst serving with the 1st Pioneer Battalion. He was 21 years of age. Three of his uncles served with the AIF. They were: 5882 Pte Ernest Edward Morley, 21st Battalion, who died of wounds on 14 May 1917 in France. He is buried in St. Sever Cemetery Extension in Rouen, France. 4479 Pte George Thomas Morley, 26th Battalion, who was killed in action on 5 August 1915 at Pozieres, France and is commemorated on the Villers-Bretonneux Memorial on the Somme, France and 1501 Trooper Robert Herbert Morley, 4th Light Horse Regiment, who was killed in action on 31 October 1917 in Palestine. He is buried in Beersheba War Cemetery in Israel and Palestine (Including Gaza). 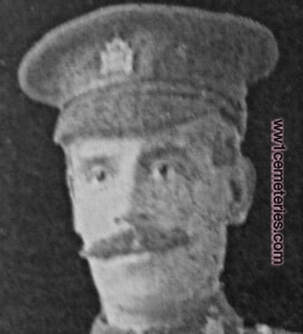 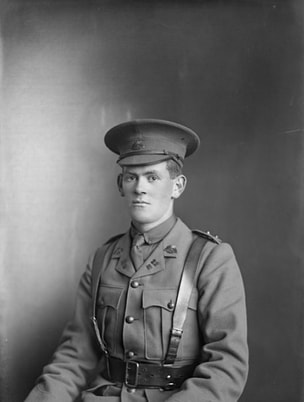 Studio portrait of Lieutenant (later Captain) Herbert Franklin Curnow, 22nd Battalion, of South Melbourne, Vic (originally of Bendigo, Vic). Prior to enlistment he was a Records Clerk in the Department of Defence. Captain Curnow embarked with the 22nd Battalion on board HMAT Ulysses on 10 May 1915. He was killed in action on 5 August 1916 at Pozieres, France.