​​​
Israel and Palestine (including Gaza) 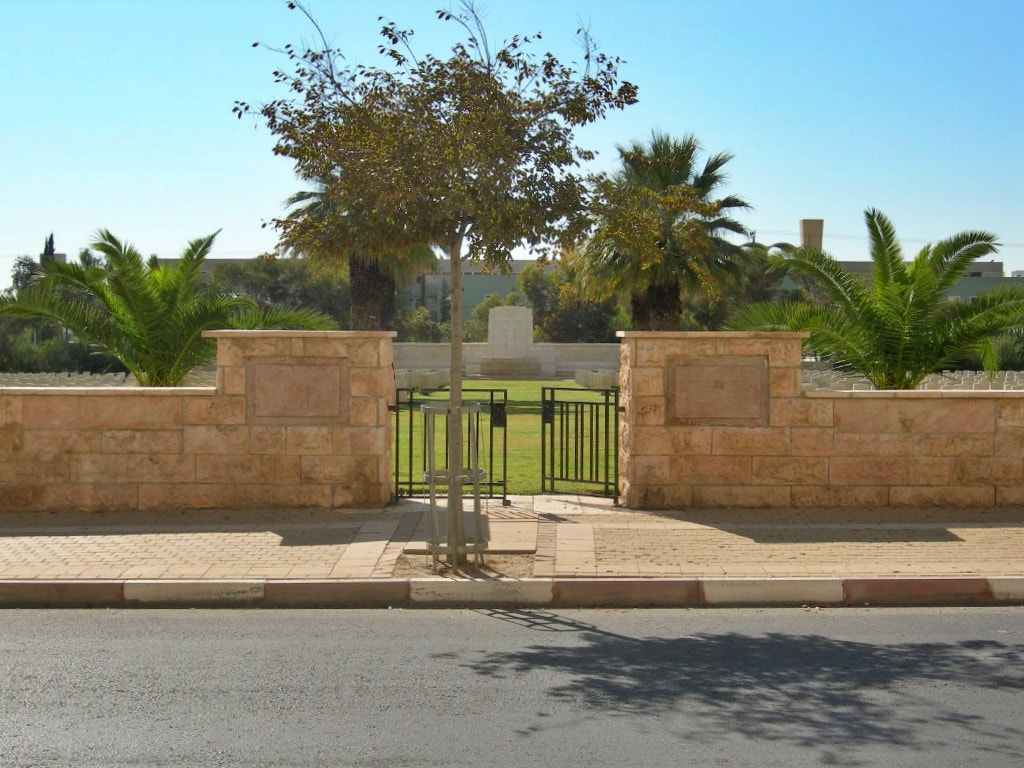 Picture used with the permission of the CWGC
​Location Information

Beersheba is a southern town on the edge of the Negev Desert, 75 kilometres south-west of Jerusalem.

The Cemetery is situated on the south-west of Beersheba town. On arrival in the town via route 40, continue on until you reach a large junction with a shopping complex on your left. Turn right onto road No. 25, sign-posted Hazerim. Follow this road for 2 kilometres, turning left at the traffic lights opposite the high rise blocks, sign-posted Hazerim. The cemetery will be found on the left.

Owing to the one way road system, you must do a complete tour to reach the entrance so continue and turn left at the next set of traffic lights. Then take the next left onto Harzfeld Street. At the end of this street, turn left and the cemetery entrance is on your left.

By October 1917, General Allenby's force had been entrenched in front of a strong Turkish position along the Gaza-Beersheba road for some months, but they were now ready to launch an attack with Beersheba as its first objective. On 31 October, the attack was carried out by the XXth Corps (10th, 53rd, 60th and 74th Divisions) on the west, and the Desert Mounted Corps on the east. That evening the 4th Australian Light Horse Brigade charged over the Turkish trenches into the town.

The cemetery was made immediately on the fall of the town, remaining in use until July 1918, by which time 139 burials had been made It was greatly increased after the Armistice when burials were brought in from a number of scattered sites and small burial grounds.

The cemetery now contains 1,239 Commonwealth burials of the First World War, 66 of them unidentified. 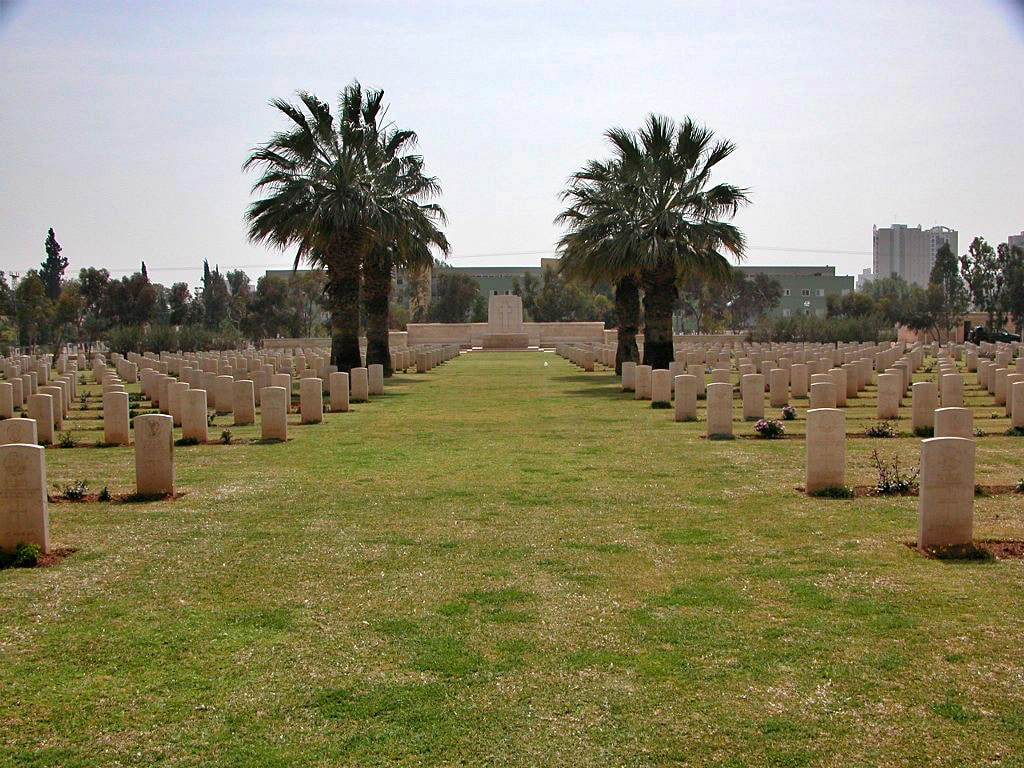 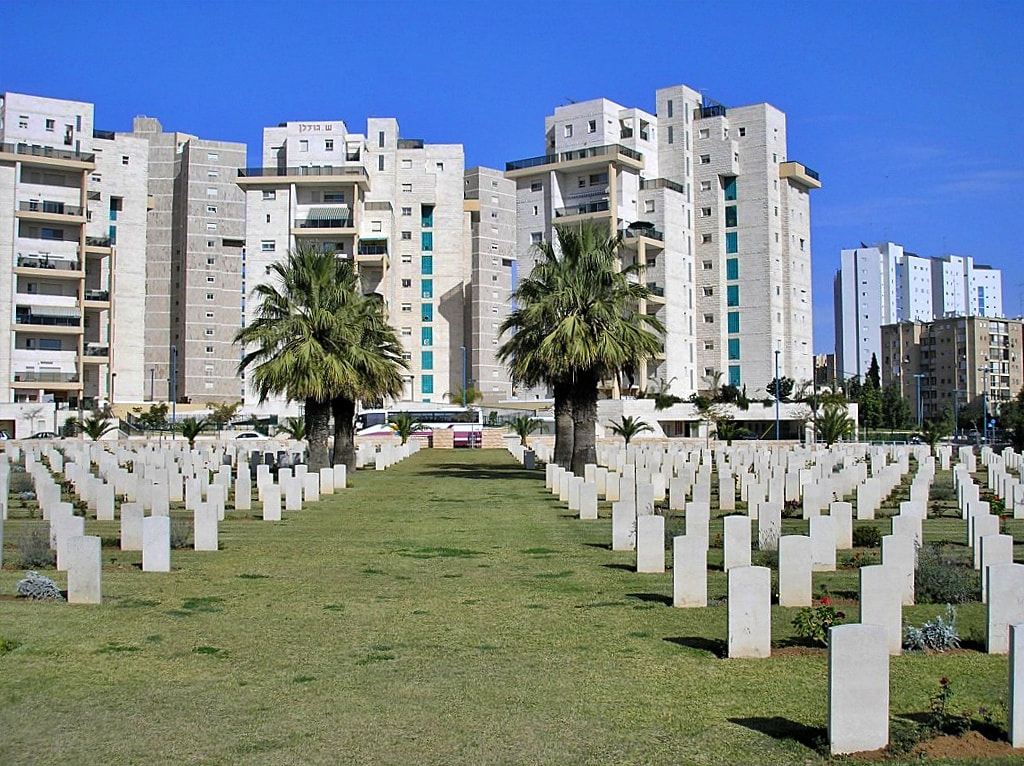 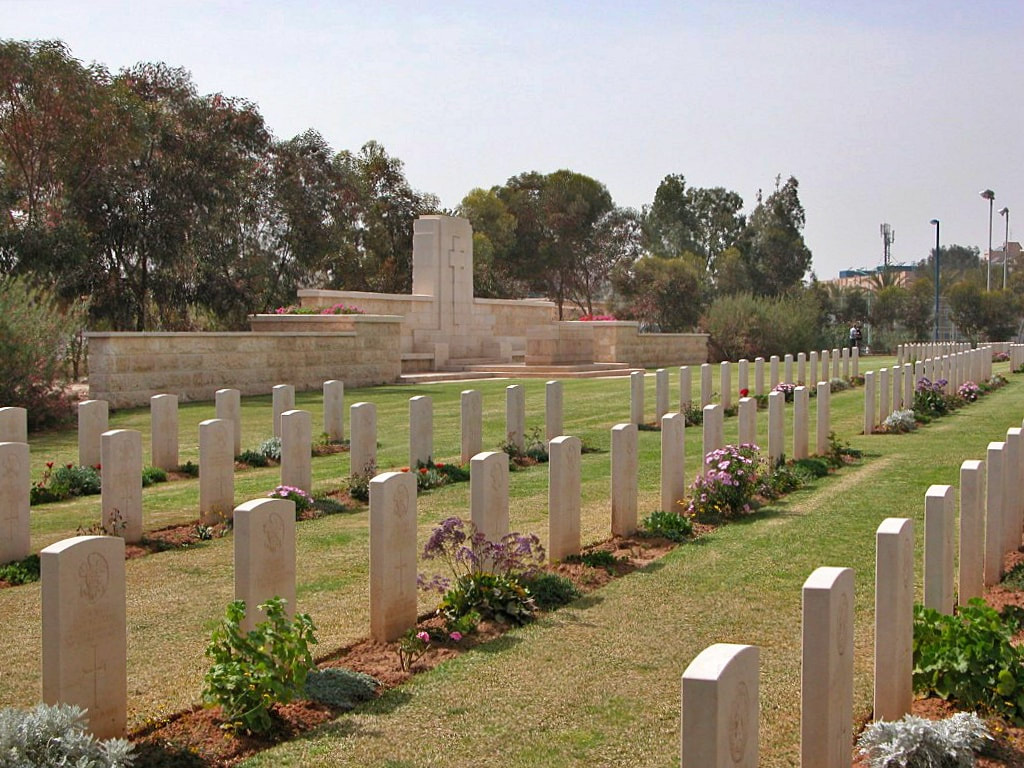 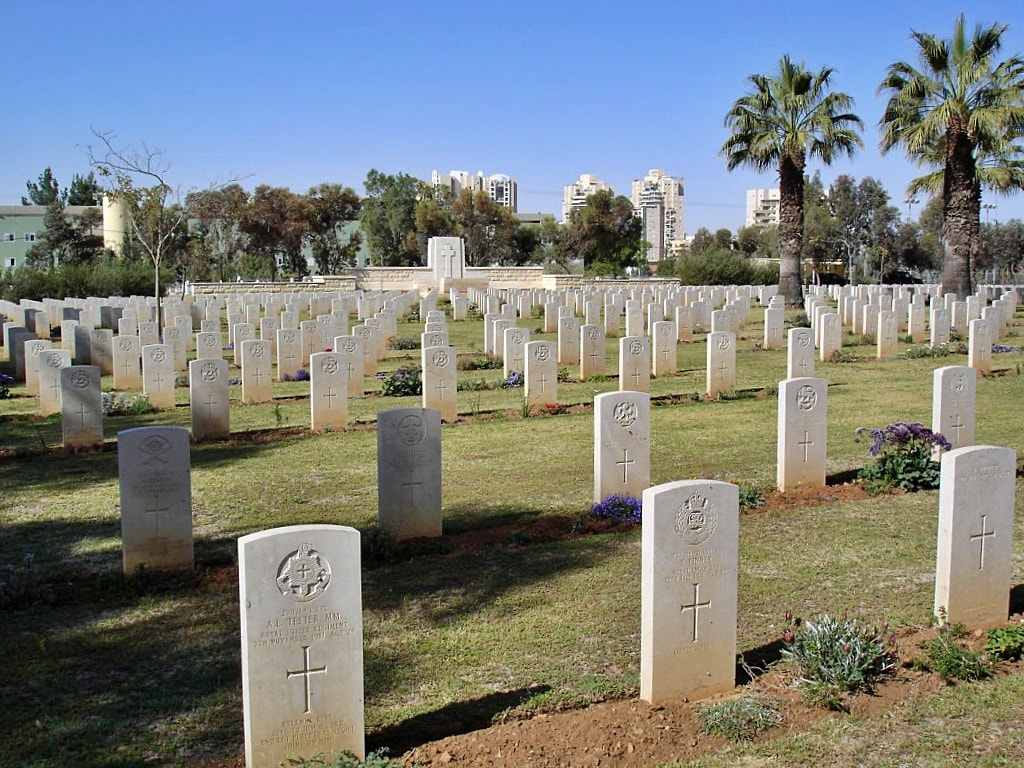 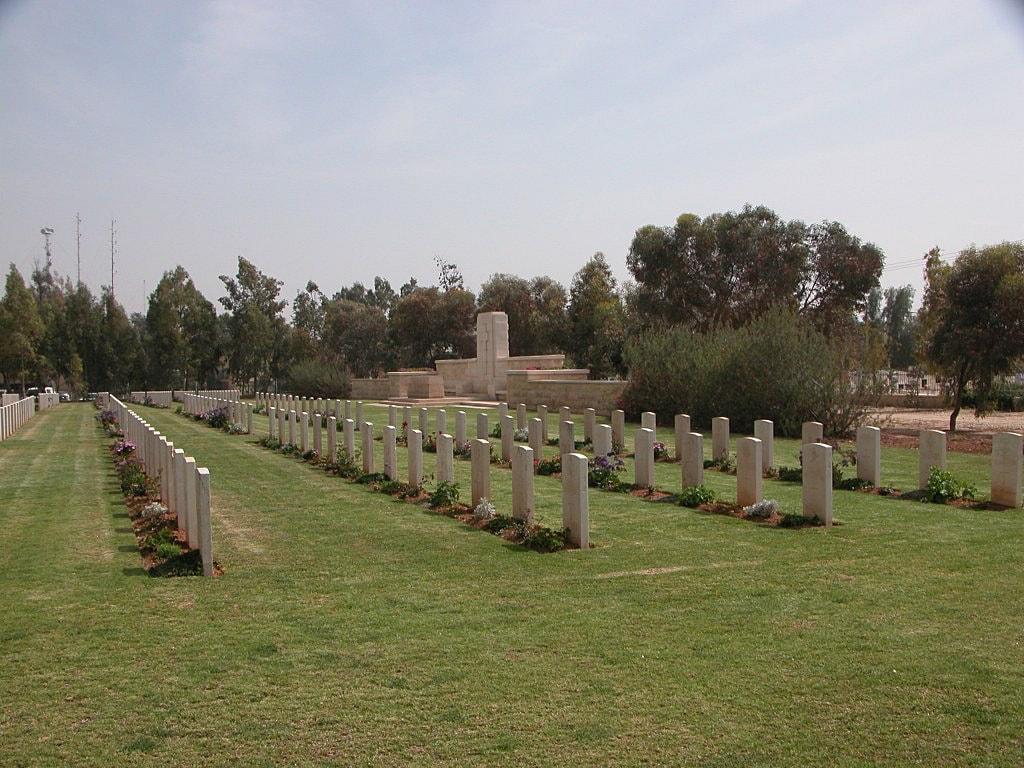 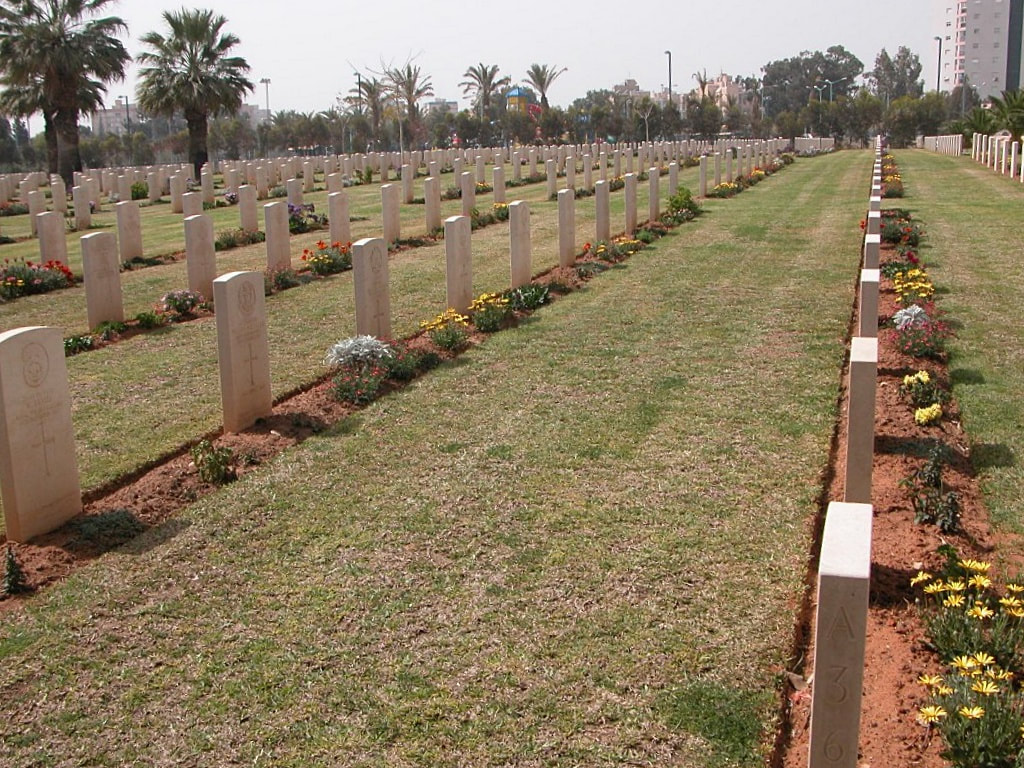 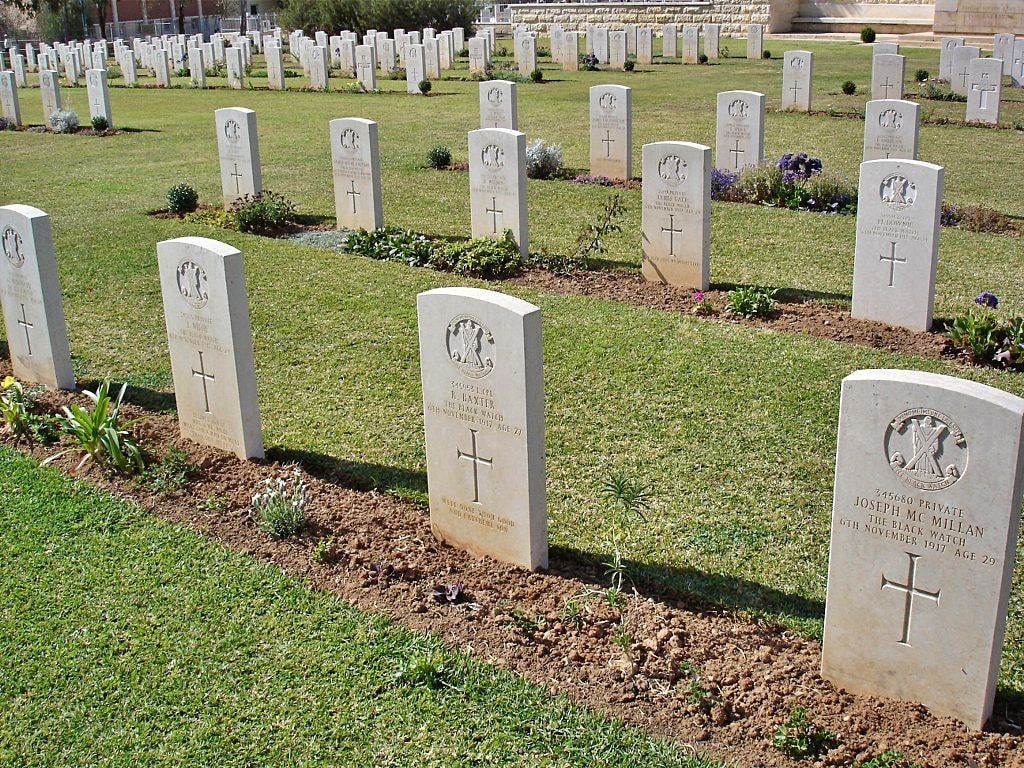 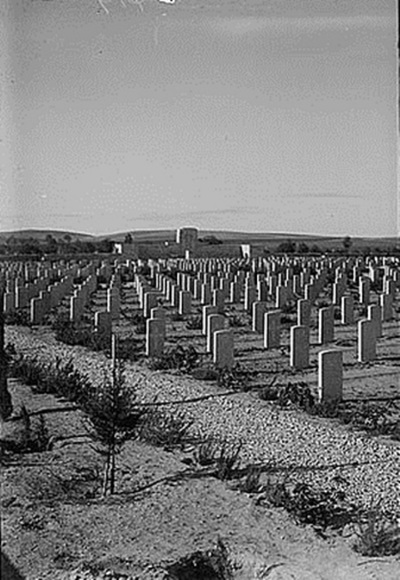 ​An extract from "The London Gazette" (No. 30433), dated 14th Dec., 1917, records the following:-"For most conspicuous bravery, leadership, and self-sacrifice when holding a position for over seven hours against vastly superior enemy forces. All this time the enemy were shelling his position heavily, making it very difficult to see. In one attack, when the enemy cavalry charged his flank, he drove them back with heavy losses. In another charge they left fifteen casualties within twenty yards of his trench, one man, who reached the trench, being bayonetted by Major Lafone himself. When all his men, with the exception of three, had been hit and the trench which he was holding was so full of wounded that it was difficult to move and fire, he ordered those who could walk to move to a trench slightly in the rear, and from his own position maintained a most heroic resistance. When finally surrounded and charged by the enemy, he stepped into the open and continued to fight until he was mortally wounded and fell unconscious. His cheerfulness and courage were a splendid inspiration to his men, and by his leadership and devotion he was enabled to maintain his position, which he had been ordered to hold at all costs.

His headstone bears the inscription "In Memory"
​
Leslie Cecil Maygar was the first Victorian to win the Victoria Cross. He was awarded the D. S. O. in October 1917 whilst commanding the 8th Light Horse Regiment.

​An extract from the "London Gazette," dated 11th Feb., 1902, records the following:- "At Geelhoutboom, on the 23rd November 1901, Lieutenant Maygar galloped out and ordered the men of a detached post, which was being outflanked, to retire. The horse of one of them being shot under him, when the enemy were within 200 yards, Lieutenant Maygar dismounted and lifted him on to his own horse, which bolted into boggy ground, causing both of them to dismount. On extricating the horse and finding that it could not carry both, Lieutenant Maygar again put the man on its back and told him to gallop for cover at once, he himself proceeding on foot. All this took place under a very heavy fire."

An extract from "The London Gazette" (No. 30491), dated 8th Jan., 1918. records the following:- "For most conspicuous bravery displayed in action until he was killed. Capt. Russell repeatedly went out to attend the wounded under murderous fire from snipers and machine guns, and, in many cases where no other means were at hand, carried them in himself although almost exhausted. He showed the highest possible degree of valour." 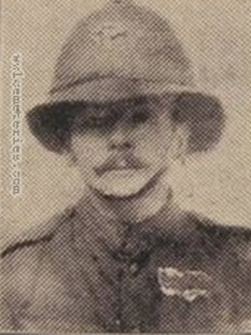 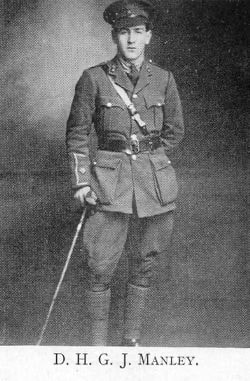 Only son of the Rev. H. J. and Mrs. A. Marguerita Jones Manley, of Llanbedrog Rectory, Pwllheli.

His headstone bears the inscription "Goodbye" Until We Meet Again"

The information below supplied by 'The Ellesmerian Club', the alumni organisation for Ellesmere College where David was a pupil.
​

David Henry George Jones Manley entered the “Gordon” dormitory at Ellesmere College in January 1908 just before his thirteenth birthday when there were only one hundred and forty-two boys in the college.

He soon became immersed in the sporting side of life and played for his dormitory football team when only a junior. Over the years, his sporting prowess developed and he played in all the principal teams in football, hockey and cricket earning his Colours in all three sports as well as his swimming Colours in 1913.

He was formally appointed Captain of Football (1912), Captain of Hockey (1914), Captain of Shooting (1914) and became an elected member of the Games Committee and the Debating Society. He appeared in many drama performances, was a member of the Fire Brigade and worked his way up through the ranks of the Officers Training Corps to Colour-Sergeant. He was appointed dormitory Prefect in 1912, then Prefect of Hallbefore he left in July 1914 to attend Keble College, Oxford.

He enlisted in the Public Schools Battalion as Private Manley in October 1914 with his appointment to 2ndLieutenant being gazetted on 9th November 1914.  A short time afterwards, he was commissioned to the 6th(Territorial) Battalion, the Royal Welsh Fusiliers which was attached to 158 Brigade, 53rd (Welsh) Division.

The Division sailed from Devonport in July 1915 and arrived at Mudros on 5th August. Four days later they disembarked at Gallipoli and immediately saw action in a Turkish counter attack during the Battle of Sari Bair before becoming involved in the assault on Scimitar Hill. David saw action right through the Gallipoli Campaign and saw his battalion suffer huge losses in manpower as they succumbed to the horrific conditions they had to endure. Extreme weather in November further decimated their strength

On 11th December the Division was evacuated to Mudros and the day before Christmas Eve the embarked for the voyage to Egypt. Where they undertook duties on the Suez Canal defences. David was promoted Lieutenant in August 1916 and in early 1917 his unit moved to Palestine where they remained for the rest of the war. He was involved in the Battles of Gaza and in the successful capture of Jerusalem. He was further promoted Captain in May 1917.

He was killed in a skirmish at Tel Khuweilfeh on 6th November 1917 and was buried at Beersheba War Cemetery. He was just 22 years old.

His father, the Reverend Henry J. Manley, received very many letters following the loss of his son. Lieutenant Colonel Mills, his Commanding Officer, wrote: “We have lost a true friend and one of the bravest soldiers in the Army. He died as he would have wished, like a true soldier, fighting to the end.”

Major Evans wrote: “George and I were very great friends. We had so many ideals in common and had worked together for so long and so closely that I had come to regard him as a younger brother. We were working and fighting together on the morning of the 6th, till within half an hour of his death. He was doing splendid work, better even than he had done before, and more than that one cannot say…..Had he lived he would assuredly have received a decoration for his gallantry and good work, and I enclose a note I had written to the C.O. (recommending him for a decoration) just before his death. There is not an officer in the Battalion who would not have willingly risked his life to have saved him…..To those of us who knew him best the loss is greatest”

Major Roberts wrote: “Words cannot express my grief over the loss of as brave a soldier and as true a friend as any man ever had. I trust you will accept my deep sympathy as a family in your great sorrow – the loss of one of the finest and best fellows that had ever lived”

The Chaplain (D. A. Jones, Old Ellesmerian) wrote: “A gallant soldier and a fine character – handsome in body and handsome in soul. It is just the simple truth to say that he was the most loved man in our Battalion, and I think one of the best soldiers in the Army. If the whole truth were known, it would be found that his example in leading his men calmly and courageously in a most murderous place was one of the greatest factors in turning what was the hottest and severest battle fought in Palestine into a most important victory on the flank of the enemy. When burying Captain Manley, one felt it would be better to be with him than left behind. We shall never forget Captain Manley – the true, sensible, loyal, honourable, lovable man that he was”.

David’s life is commemorated on memorials at Llansantffraid, Bangor Cathedral (in the organ vestry) and at Ellesmere College. His parents commissioned a stained glass window for St. Pedrog’s Church, Llanbedrog. 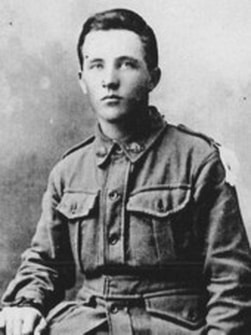 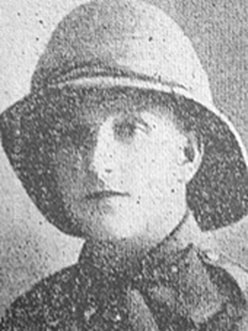 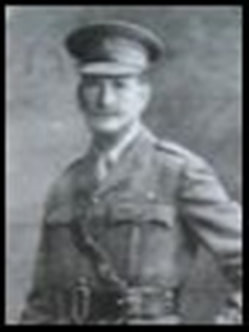 Other Cemeteries in Israel and Palestine (including Gaza)