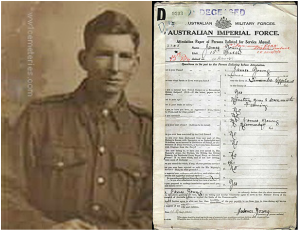 Son of Michael and Catherine Egan. Born at Victoria.

Originally shown to have been 'buried at a small cemetery about 500 yards W. N. W. of Contalmaison at the Chalk Pits.'

"He was killed during a charge over the ridge at Pozieres, he had just jumped up on the parapet when a bomb burst and wounded him badly in the side. He lay in a dug out until morning when he was taken away to a dressing station, dying on the way.

He was buried in the cemetery at the back of Sausage Gully and a wooden cross erected bearing name, number and battalion. After being wounded he spoke to me saying, I'm finished, but he left no messages.

He was 5ft 9', fair complexion and nicknamed Youngey." 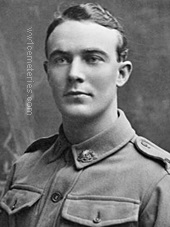 Formerly a clerk, L/Cpl Fallon enlisted on 18 October 1915 and as a member of the 14th Reinforcements, he embarked from Fremantle, WA, aboard HMAT Miltiades (A28) on 12 February 1916. He served on the Western Front where he was killed in action on 16 April 1917, during the battle of Lagnicourt. 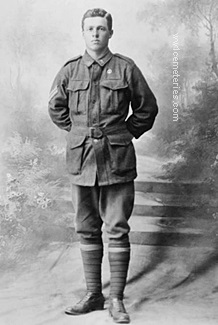 Born in Buderim Mountain, Qld, and was a manager of a fruit farm in Ipswich, Qld, at the time of his enlistment on 27 July 1915. He sailed as a private with 11th Reinforcements, 9th Infantry Battalion, from Brisbane on HMAT Warilda on 5 October 1915. He was promoted to Lance Corporal on 4 April 1916, Corporal on 13 April 1916 and Sergeant in the field in France on 28 August 1916. He was wounded in action, returned to a dressing station to have his wounds dressed, but refused to remain at the station. Sgt Foote returned to his battalion to assist other wounded soldiers to reach assistance. His service file states that he returned numerous times to assistant wounded soldiers and provided leadership and encouragement to other soldiers. He was awarded the Military Medal posthumously on 19 April 1917 for bravery in the field. Sgt Foote was killed in action on 3 September 1916 at Mouquet Farm, France, aged 25 years. 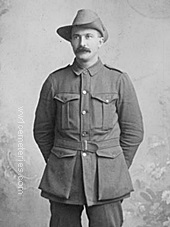 A labourer for Mount Lomarch, Vic., prior to enlistment, Pte Forte embarked with A Company from Brisbane on HMAT Ascanius on 24 May 1915. In November 1915 he was awarded the Military Medal for "for exceptional energy and pluck as a bomb thrower at Russell Top, Gallipoli". On 2 March 1917 he was killed in action at Lagnicourt, France. His brother 3735 Pte Walter Forte also served with the AIF and returned to Australia on 2 March 1919. 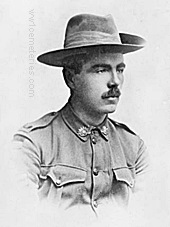 A farmer from Subiaco, WA prior to enlistment, Cpl Foss embarked with the rank of Private with the 19th Reinforcements from Fremantle on HMAT Miltiades on 7 August 1916. Subsequent to his promotion to Corporal, he was killed in action on 3 June 1918, aged 33, and is commemorated on the Villers-Bretonneux Memorial. His two brothers, Captain Cecil Maitland Foss and Second Lieutenant Henry Clinton Foss, both of the 28th Battalion, were also killed in action. Cecil is buried at Puchevillers British Cemetery and Henry is also commemorated on the Villers-Bretonneux Memorial, his details can be seen below this entry. 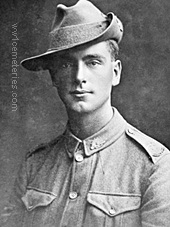 A farmer from Subiaco, WA prior to enlistment, 2nd Lt Foss embarked with the rank of Acting Corporal with C Company, 10th Light Horse Regiment from Fremantle on HMAT Surada on 17 February 1915. After promotion to Sergeant he was Mentioned in Despatches "for gallantry (when he) volunteered to bomb Turks from barricade on Kaiajik Aghala. (He) held on for 31 hours and repulsed 3 Turkish attacks on the barricade". Later he transferred to the 51st Battalion and then the 28th Battalion where, after successfully completing the appropriate training, he was promoted to 2nd Lieutenant. On 3 May 1917 he was killed in action, aged 29, and is commemorated on the Villers-Bretonneux Memorial. His two brothers, Captain Cecil Maitland Foss, also of the 28th Battalion, and 5969 Corporal Ernest Cecil Foss, 11th Battalion, were also killed in action. Cecil is buried at Puchevillers British Cemetery and Ernest is also commemorated on the Villers-Bretonneux Memorial, his details can be seen in the entry above this one.​ 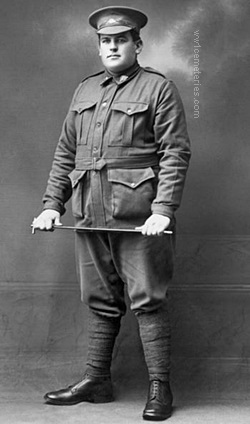 A farmer of Timmering, Vic, who enlisted on the 25 April 1916. Pte Fraser joined the 20th Reinforcements to the 7th Battalion and left for England from Melbourne on board HMAT Euripides on 11 September 1916. After training in England Pte Fraser joined the 7th Battalion in France on 29 December 1916. He was killed in action at Lagnicourt, France, on 23 April 1917, aged 24 years. He was originally reported to be buried at Pronville near Bapaume, but this proved to be incorrect. Pte Fraser has no known grave. 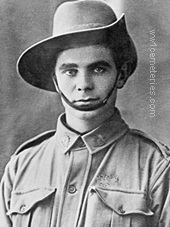 A clerk from Wallaroo, SA prior to enlistment, Pte Furner embarked with the 5th Reinforcements from Adelaide on HMAT Hororata on 20 April 1915. On 6 May 1917 he was killed in action at Bullecourt, aged 20, and is commemorated on the Villers-Bretonneux Memorial. He was a cousin of Brigadier-General George Furner Langley DSO. 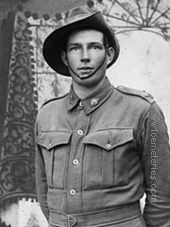 A Farmer of Darkan, WA, who enlisted on 15 February 1916 and embarked from Fremantle, WA aboard HMAT Shropshire on 31 March 1916, with the 11th Reinforcements, 28th Infantry Battalion, 7th Infantry Brigade. Pte Gibbs was killed in action on 27 August 1916 at Pozieres 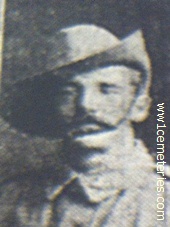 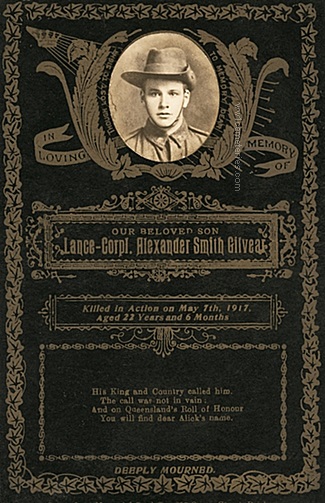 Pte Gilvear was a labourer from the Glass House Mountains, Queensland when he enlisted in October 1915, the first of his family to do so. Over the next six months four of his brothers enlisted. They were followed by his father, who left his wife with three girls and a boy, all under 16, to carry on the work of the farm. Lance Corporal Gilvear was also the first of his family to die, being killed in action on 7th May 1917. On 2nd June 1917 The Queenslander newspaper carried the following Roll of Honour notice:
"GILVEAR. Killed in action, in France, on May 7th, 1917, Lance-Corporal Alexander Smith Gilvear, third son of Private Thomas Gilvear and of Christina Gilvear, Glass House Mountains, age 22 years and 6 months. Much and deeply regretted. His King and country called him / The call was not in vain / And on Queensland's Roll of Honour / You will find dear Alick's name. Until we meet in Heaven above, Alick. Inserted by his sorrowing mother, sisters, and brother." The following year two of his brothers, 65 Corporal Kenneth Gilvear (buried at Bonnay Communal Cemetery Extension) and 2428 Pte Robert Gilvear, (also commemorated on the Villers-Bretonneux Memorial) were also to die; his father and two remaining brothers returned to Australia in 1919. 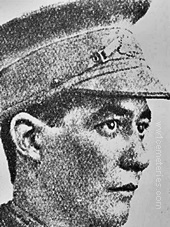 A labourer from New Hindmarsh, South Australia, prior to enlistment, he embarked with the 7th Reinforcements from Adelaide on 6 November 1916 aboard HMAT Afric for Plymouth, England. After seven months training he joined his battalion on the Western Front near Messines, France. Pte Grafe was wounded in action at Westhoek Ridge, Belgium, on 26 September 1917 and was evacuated to Boulogne for treatment and recuperation before rejoining his unit a month later. He was also hospitalised due to illness from late February to early April 1918. Pte Grafe was killed in action at Villers-Bretonneux on 25 April 1918. He has no known grave and he is commemorated on the Villers-Bretonneux Memorial. He was aged 23 years. His older brother, 3182 Pte John William Grafe enlisted in the 10th Battalion and embarked with the 8th Reinforcements on 2 September 1915 for Suez. While there he was initially diagnosed with pleurisy which subsequently was changed to tuberculosis. He was repatriated to Australia for palliative treatment prior to discharge in November 1916. Pte J W Grafe died of this disease on 11 December 1917 and is buried in the Hindmarsh Cemetery, South Australia. 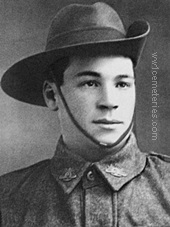 Son of John and Louisa Gray, of Fern Tree, Tasmania.

​From Fern Tree, Tas. A bushman before enlisting in July 1916, Pte Gray formed part of the 22nd Reinforcements of the 12th Battalion along with his older brother 6737 Pte Victor Gray. Charles Gray was killed during the German attack at Lagnicourt on 15 April 1917. Victor Gray died five days earlier at Bullecourt and was buried in Bapaume Australian Cemetery.​ 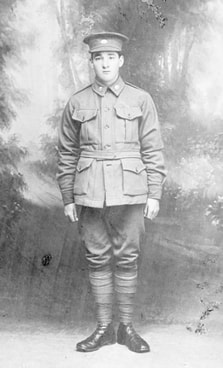 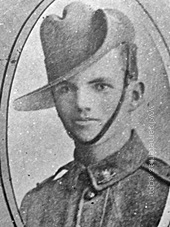 From Coonamble, NSW. Pte Gribble enlisted on 8 January 1915 and embarked from Newcastle on 21 May 1915 aboard HMAT Kabinga. He was killed in action on 22 March 1917 at Beaumetz, France, aged 24 years. His brother, 979 Pte Norman Arthur Gribble, 4th Battalion, was killed in action on 19 May 1915 on the Gallipoli Peninsula, and is buried at 4th Battalion Parade Ground Cemetery. 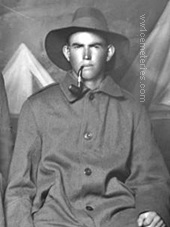 A labourer from Marungi, Victoria prior to enlistment, Pte Groves embarked with the 13th Reinforcements from Melbourne on HMAT Ayrshire on 3 July 1916. He was accompanied by his cousin and best friend, 5008 Pte Ernest Henry Fowles, 22nd Battalion also of Marungi, who enlisted at the same time. The cousins were killed in action in France on 16 April 1917 seemingly at the same moment. Both their service records state the men were "buried in sunken road leading from Noreuil to Ecoust St Mein, Map 57 C.N.W. C9.A9.7" neither was identified after the war and they are commemorated on the Villers-Bretonneux Memorial. 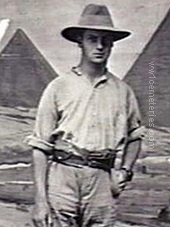 "I saw him killed outright  by a shell on Aug. 4th. He was on fatigue and was carrying ammunition to new trenches at Pozieres, called Jimmie; I did not see him buried, there was too much of a mix-up to bury men."
​ 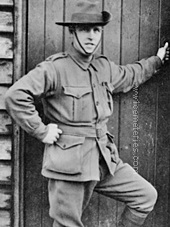 Son of the late John and Martha Haslam; husband of A. A. Haslam, of 19, Carlotta Rd., Double Bay, New South Wales. Born at Adelaide.

A civil servant before enlisting in February 1916, Pte Haslam was temporarily promoted to the rank of Company Sergeant Major due to his pre-war service as a Lieutenant in the Citizens Military Forces (CMF) and left Australia for England with the 20th Reinforcements in September 1916. Reverting to the rank of Pte in December 1916, he arrived in France for service on the Western Front in February 1917. Pte Haslam was killed instantly by a machine-gun fire when when the 4th Battalion were attacked at Hermies on 15 April 1917, aged 33. The small cross marking his grave was lost, and consequently he has no known grave. 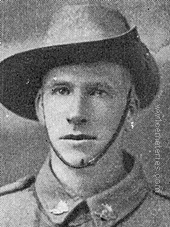 From Gumnock, NSW. Son of George and Mary Hayman of Two mile creek near Molong, NSW. A motor-driver prior to enlisting, he embarked from Sydney aboard RMS Mooltan on 11 December 1915. He was killed in action on the Sunken Road going up to Contalmaison, Pozieres, France on 22 July 1916, aged 28. 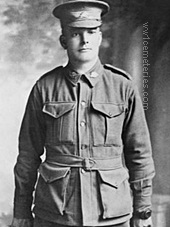 
A 40 year old salesman prior to enlisting on 25 February 1916, he embarked for overseas with D Company from Melbourne on 20 June 1916 aboard HMAT Runic. After a short time in hospital, he joined the battalion in France where he was killed in action near Armentieres on 1 January 1917. 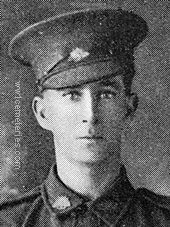 A night sweeper prior to enlisting, he embarked from Sydney aboard HMAT Port of Sydney (A15) on 4 September 1916. He was killed in action at Louverval, France on 2 April 1917, aged 20. He was buried near the Cambrai Rd., between Louverval and Doignies, France. Post war his grave was not located. 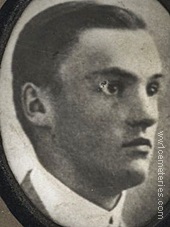 A 22 year old salesman from North Adelaide, South Australia when he enlisted on 19 August 1914. He embarked for overseas from Adelaide aboard HMAT Ascanius on 20 October 1914. While at Gallipoli he was promoted to Lance Corporal and then to Corporal less than four months later and was the Company Quartermaster Sergeant. He transferred to the 50th Battalion on 26 February 1916, was wounded in action in France on 13 August 1916 and then promoted to 2nd Lieutenant on 26 August 1916. He was killed in action near Mouquet Farm, France, on 3 September 1916 and was buried 2,000 yards east south east of Thiepval, France. His grave could not be located after the war and his name is listed on the Villers Bretonneux Memorial, France with those who have no known grave. After his death, he was awarded the Military Medal for "Great devotion to duty during the first days of the Landing at Gallipoli. Although badly wounded in the head he rendered valuable service by carrying messages to and from the firing line under heavy fire. He remained on the Peninsula for seven months without a day off duty."