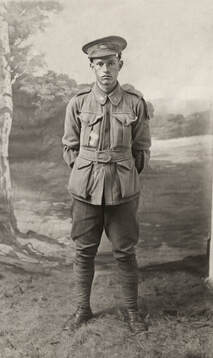 Inscription "Peace Be His With The Lord"

Studio portrait of 3957 Private (Pte) Abel Henry Arford. A carter from Tamworth, NSW, he embarked from Sydney aboard HMAT Runic (A54) with the 20th Battalion on 20 January 1916. Pte Arford was killed in action in France on 25 February 1917. . 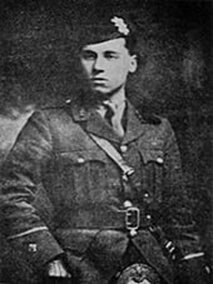 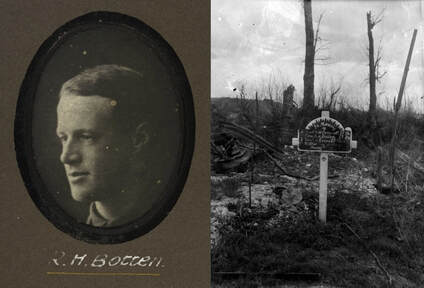 Studio portrait of Second Lieutenant Robert Hillman Botten, 27th Battalion who was a 27 year old bank official from Prospect, South Australia when he enlisted on 29 September 1915. He embarked for overseas with the15th Reinforcements from Adelaide on 28 August 1916 aboard HMAT Anchises. After being promoted to Lieutenant, he was killed in action on 2 March 1917 while participating in an attack on a German position and was buried at Sunken Road leading off the main Bapaume Road in the village of Warlencourt, France. Lieutenant Botten was later re-interred in the Warlencourt British Cemetery. 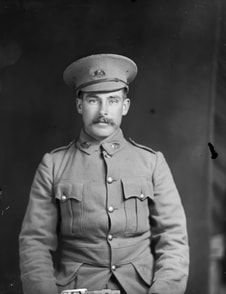 Inscription "Nearer Thy God To Thee"

Studio portrait of 2576 Private (Pte) Arthur Mackay Boxshall. A labourer from Sorrento, Victoria prior to enlistment, Pte Boxshall embarked with the 6th Reinforcements, 22nd Battalion from Melbourne on HMAT Ulysses on 27th October 1915. Later transferring to the 2nd Pioneer Battalion, he was reported as wounded and missing in action. A court of enquiry subsequently determined that he had died of wounds 14th November 1916. His remains were later recovered and interred in the Warlencourt British Cemetery, Arras, France. 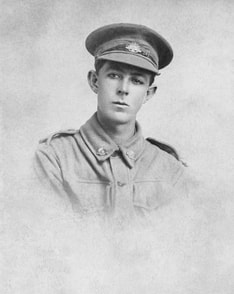 Inscription "Sweet Jesus Have Mercy On His Soul"

Studio portrait of 4063 Private (Pte) Gordon Bede Brennan, 19th Battalion, of Cabramatta, NSW. Pte Brennan enlisted on 19 November 1915; he was killed in action on 14 November 1916 at Flers near the Somme, aged 18, and is buried in Warlencourt British Cemetery, Pas de Calais, France. 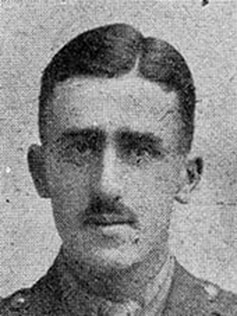 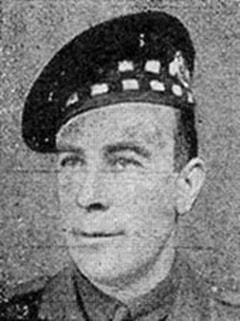 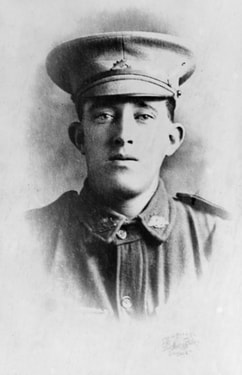 Inscription "A Soldier Of Rabaul Gallipoli & France His Duty Done"

Studio portrait of 499 Private (Pte) James Frederick Buckland, 19th Battalion, of Kogarah, NSW. Pte Buckland enlisted on 2 March 1915 and was killed in action before the "second barque" on the Somme, France, on 14 November 1916. He had previously served in the Militia. This portrait of Pte James Buckland is one of a number displayed on a photo montage Honour Board made for the department store Anthony Hordern and Sons Ltd, Sydney by the returned soldier and sailor employees of the company. It commemorated 46 of the company's 48 employees who died as a result of their service in the First World War. 499 Pte Buckland worked as an iron moulder at Anthony Hordern prior to his enlistment. (His brother, a pre-war cadet, 4076 Pte John Thomas Buckland, also served with him in the same company of the Battalion and he was killed in action at Polygon Wood, Belgium, on 10 October 1917). 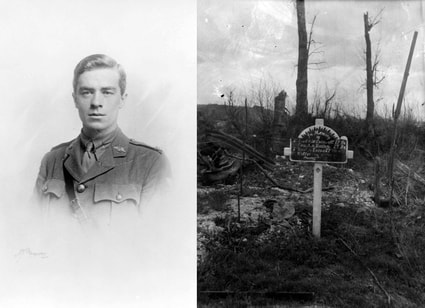 Studio portrait of Second Lieutenant David Wallis Caldwell, 27th Battalion, of Semaphore, SA. A carpenter before his enlistment in January 1915, he embarked from Adelaide, on HMAT Geelong with the rank of sergeant and service number 290. Later promoted to the rank of Lieutenant, Caldwell was killed in action during an attack on Malt Trench at the Butte de Warlencourt on 2 March 1917, aged 24, and is buried at Warlencourt British Cemetery in France. 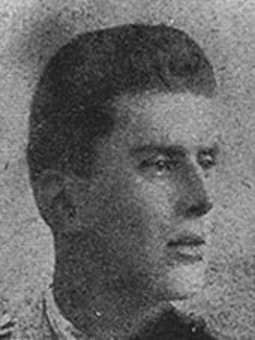 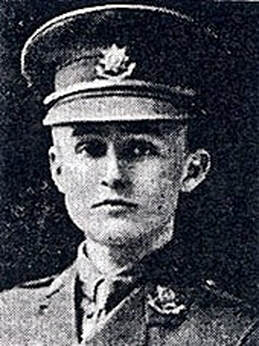 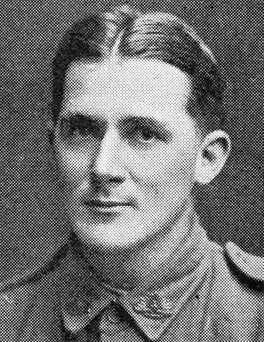 Inscription "He Died For Liberty Empire And Home"

Studio portrait of 1520 Corporal (later Sergeant) Reubin Collings, 19th Battalion of Wollongong, NSW. A clerk prior to enlisting, he embarked from Sydney aboard HMAT Themistocles on 12 May 1915. On 14 November 1916, he was killed in action near Flers, France, aged 23. 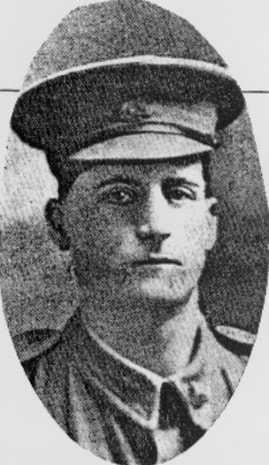 Studio portrait of 845 Private (later Corporal) John Stanley Cox, 26th Battalion, of Lambton, NSW. An orchardist prior to enlistment, he embarked on 29 June 1915 from Brisbane as a member of C Company, aboard troopship HMAT Aeneas (A60). After training in Egypt, the battalion landed at Gallipoli on 12 September. At Gallipoli, the 26th played a purely defensive role and at various times was responsible for the defence of Courtney's and Steele's Posts, and Russell's Top. It withdrew from the peninsula on 12 December.
​
After another stint in Egypt, the 7th Brigade proceeded to France as part of the 2nd Australian Division in March 1916. In concert with the 28th Battalion, the 26th mounted the first trench raid undertaken by Australian troops on the Western Front on 6 June. The Battalion fought in its first major battle around Pozières between 28 July and 7 August. After a short spell in Belgium, the 2nd Division came south in October to attack again in the Somme Valley. The 26th Battalion took part in two attacks to the east of Flers, both of which floundered in mud and slush. It was during one of these attacks that Corporal Cox was killed in action on 5 November 1916. He was aged 28 years. A former student of Prince Alfred College, Adelaide, this image appeared in their school magazine. 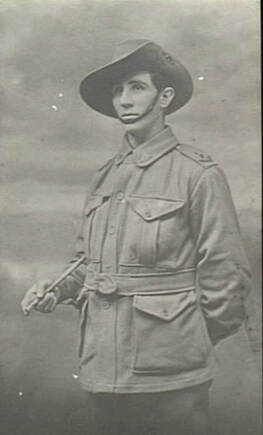 Studio portrait of 2810 Private (Pte) Ernest Sterling Davis, 56th Battalion from Rockdale, NSW. A 22 year old grocer prior to enlisting on 29 June 1915, he embarked for overseas with the 9th Reinforcements of the 4th Battalion from Sydney aboard HMAT Argyllshire on 30 September 1915. Following further training in Egypt, he transferred to the 56th Battalion and after a period of absence due to illness, rejoined the battalion in France. Pte Davis was killed in action on the Somme on 1 November 1916 and buried in the Warlencourt British Cemetery, France. 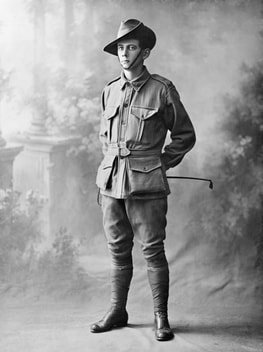 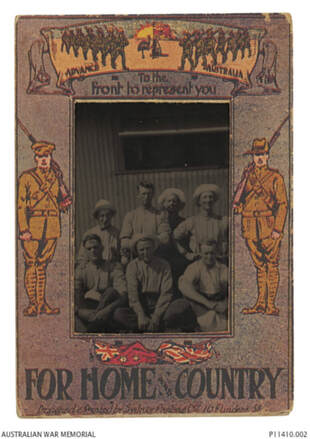 Click on image to enlarge
Informal group portrait in patriotic frame of soldiers from the 18th Battalion prior to embarkation. 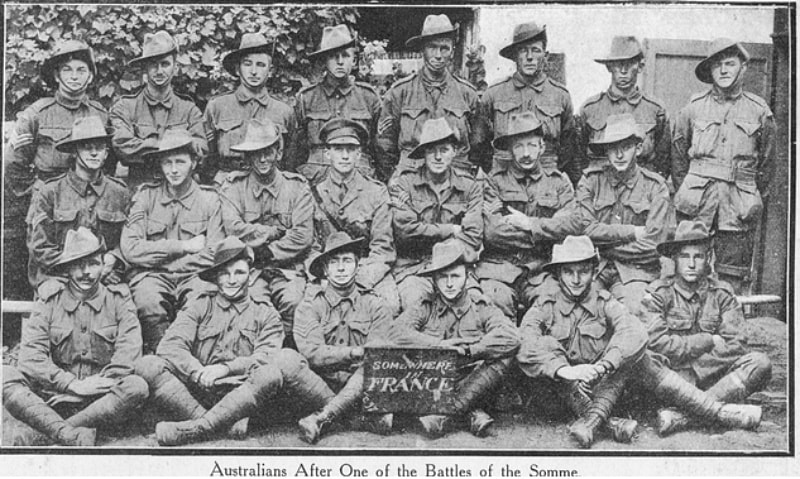 Group portrait of Australian soldiers after one of the Battles of the Somme. 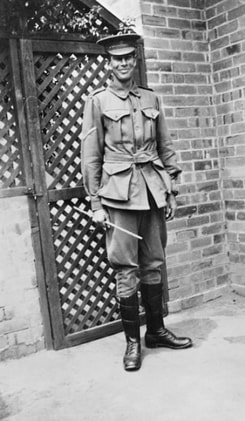 Informal portrait of 2608 Lance Corporal (LCpl) William (Jessie) Hilder Gregson, 7th Field Company Engineers, of Sydney, NSW. A surveyor for three years before enlisting in August 1915, LCpl Gregson left Australia for Egypt in December 1915. On arrival in Alexandria, he was sent to France for service on the Western Front . Two weeks after he was promoted to Sergeant (Sgt) in June 1916, Gregson was hospitalised for chest injuries sustained by a German shell, and rejoined his unit in Belgium in September 1916. Sgt Gregson took part in an attack on German positions at Flers on 14 November 1916 when he and another man were wounded by a German machine-gun bullet. The two men were placed in a shell-hole by a party of engineers who notified nearby stretcher-bearers and continued on with the attack. Although the other man was taken to a dressing-station, Sgt Gregson could not be found. Exhaustive attempts were made by the Red Cross and Gregson's family to determine his whereabouts, but it was thought that the shell hole was later swept by enemy artillery. Sgt Gregson was later listed as killed in action, age 39.