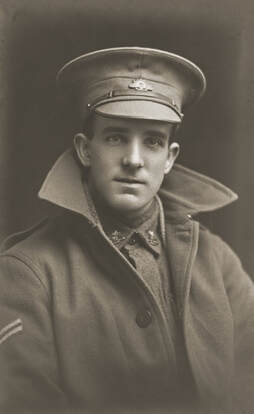 Studio portrait of 29912 Gunner James Wawn Ambler, 5th Trench Mortar Battery of Prahran, Vic. A clerk prior to his enlistment on 28 February 1916 he embarked from Melbourne on board HMAT Aeneas on 3 October 1916. The son of Raphael and Mary Ann Alice Ambler of Prahran, Vic he was killed in action at Menin Gate, Ypres on 5 September 1917, his 24th birthday, and is memorialised at 84 Ypres Reservoir Cemetery, Belgium. 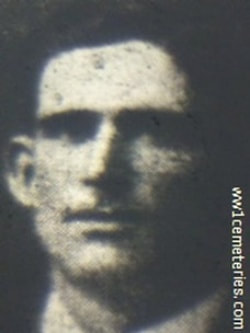 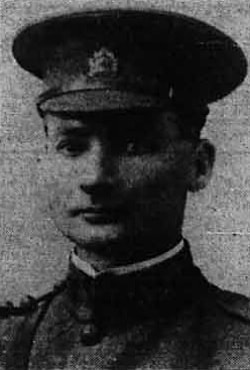 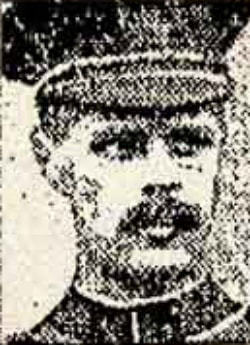 Inscription "He Giveth His Beloved Sleep" 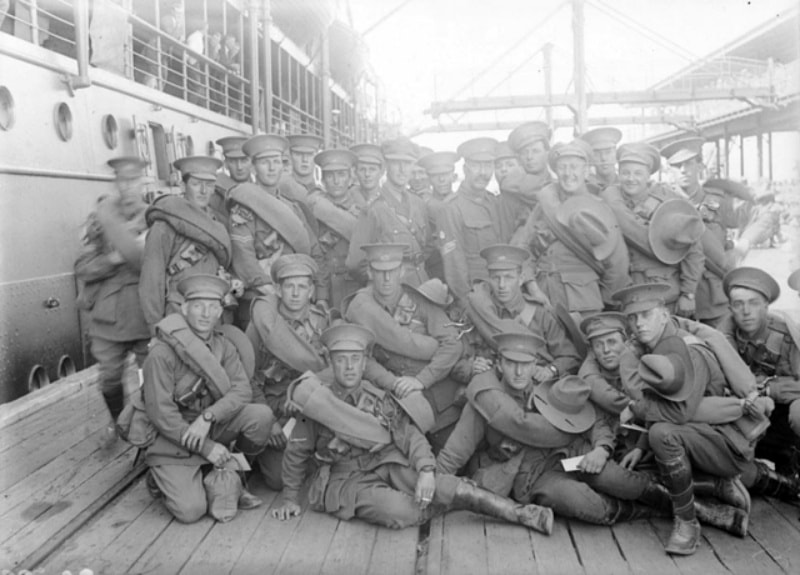 Members of the 9th Reinforcements, 10th Field Artillery Brigade, grouped on the wharf beside their troopship, RMS Orontes.
Possibly Identified in the third row is 31662 Gunner Frederick Herbert Booth, who died on 4th October 1917, aged 27. Plot I. E. 27. Son of George and Florence Nightingale Booth; husband of Lillian V. Booth, of 8, Samson St., East Perth, Western Australia. Native of Sydney, New South Wales. Inscription "He Gave His Life That We Might Live" 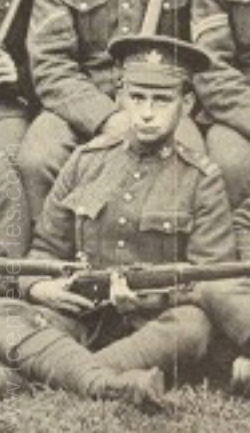 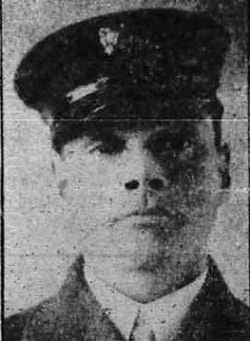 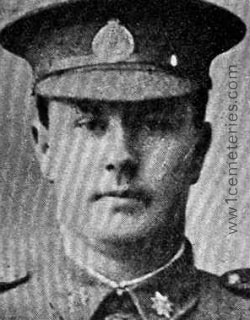 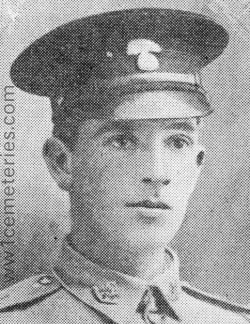 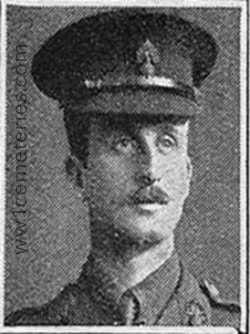 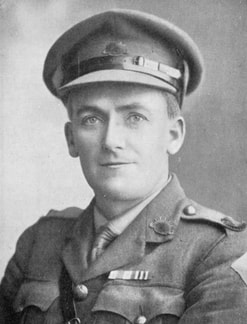 Inscription "Our Loved One R. I. P. Sacred Heart Of Jesus Have Mercy On His Soul"

Studio portrait of Lieutenant (Lt) William Matthew Conroy, MC, MM, 28th Battalion of Benalla, Victoria. A school teacher prior to enlisting, he embarked from Melbourne aboard HMAT Ajana (A31) on 4 June 1915, as 3163 Sergeant (Sgt) Conroy, 6th Field Ambulance. On 14 November 1916, Sgt Conroy was in charge of a party stationed at Factory Post, north of Flers, France when he assisted a wounded comrade and displayed excellent courage while under heavy bombardment. For this action he was awarded the Military Medal. He was promoted in the field and as Lt Conroy he was awarded the Military Cross for "gallantry and determination in leading bombing attacks in the Hindenberg Line, east of Bullecourt, France on 3 May 1917". On 1 October 1917, he was wounded in action near Zonnebeke, Belgium, and died of his wounds on 2 October 1917, aged 32. 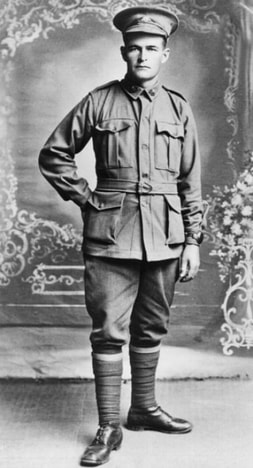 Studio portrait of 1699 Private (Pte) Edward Crowe, 32nd Battalion of Queenstown, SA. He embarked with the 2nd Reinforcements on HMAT Borda (A30) on 11 January 1916. He later transferred to the 16th Battalion. On 11 October 1917 he died of wounds received at Ypres, Belgium, aged 30 years. He had previously served in the Australian Naval & Military Expeditionary Force (AN&MEF) in New Guinea. He was awarded a Military Medal for actions in September 1917 when he showed great courage and coolness under fire when part of a convoy, collecting animals which had broken loose and were in danger of running into the Allied lines and made four trips forward carrying water that night. His brother 2186 Pte Patrick Augustine Crowe was killed in action on 28 March 1918 and is buried in Outtersteene Communal Cemetery Extension in Bailleul in France. 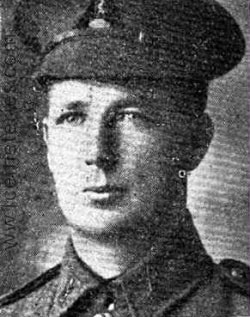 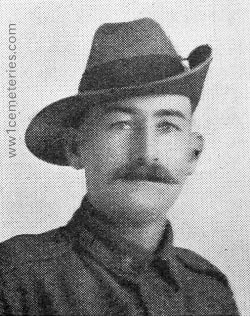 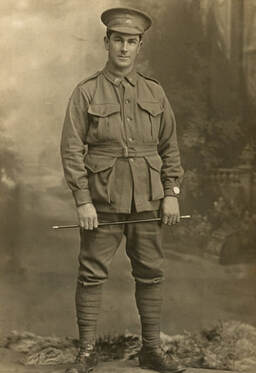 Studio portrait of 423 Private (Pte) Arthur Roy Harold Flanagan, 3rd Pioneer Battalion, of Bathurst, NSW. A grocer prior to enlistement, Pte Flanagan embarked with B Company from Melbourne on HMAT Wandilla on 6 June 1916. He was killed in action in Belgium on 18 October 1917, aged 25. 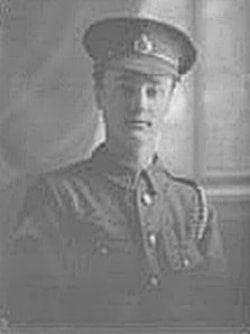 Picture courtesy of Ian Edwards
On the Left is Gavin Gordon Bulkeley Gavin and in the second picture, first on the left is James Tinnock Bulkeley Gavin.
Studio portrait of two brothers, 6188 Private Gavin Gordon Bulkeley Gavin and 6191 Lance Corporal James Tinnock Bulkeley Gavin, both of the 26th Battalion. They were both killed in action on 4 October 1917 and are buried in the Ypres Reservoir Cemetery in Belgium. Private Gavin Gavin aged twenty five is buried in Plot VII, Row B, Grave 12, and Lance Corporal James Gavin aged twenty three is buried in Plot VII, Row B, Grave 3. Sons of John Alexander Gavin and Rose Louise Desiree Gavin (nee Le Poer), of Bulkeley House, Longreach, Queensland. 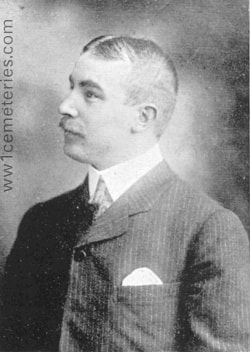