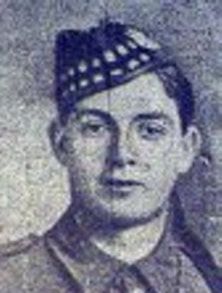 He was unmarried and resided with his widowed mother at 68 West Academy Street, Wishaw, prior to enlisting Joseph was employed at Wishaw Steel Works. 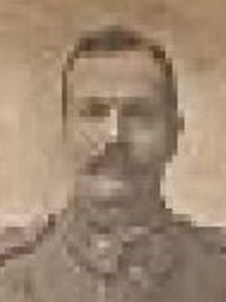 Following, being there attached to the South Wales Borderers, and was killed in action at, near Bapaume, 24 March 1918. Buried at Sapignies. His Coy. Officer wrote; “ I have known your husband ever since he came to us, and he always showed himself a good, clean soldier, and a man who always did his duty cheerfully. We shall all miss him very much”, and his Platoon Officer: “He was loved by everyone, and his manner and behaviour were of the best. I had the greatest admiration for him, and he was a brave soldier.” He m. At Holy Trinity Church, Drybrook, co. Gloucester, 24 Oct 1908, Mary , (dau. of the late Benjamin Hope, and had a son, James Albert Graham, b. 26 Oct. 1910. 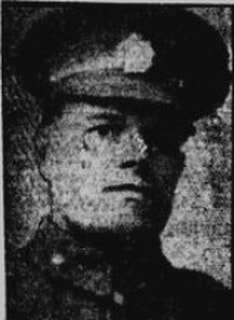 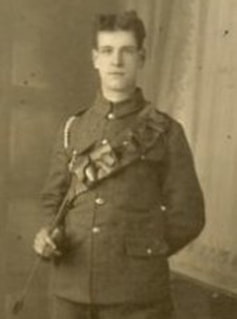 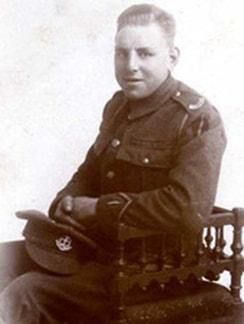 G/42791 Private
Alfred Albert Coates
20th Bn. Middlesex Regiment
26th March 1918.
Bay 7.
​
We believe he joined up with the colours of the East Surrey Regiment, August 2nd 1915, aged 16. He went to France May 22nd 1917. He came home on leave February 21st 1918, returning to France on March 7th. He was killed at a "place not stated" between 22nd and 26th of March 1918. Doing our best to ascertain his likely place of death, we followed the "Die Hards" areas of battle for those dates and it would appear to have been somewhere around Mory, Arras.

Picture courtesy of John and Audrey Thompson (niece of this soldier) 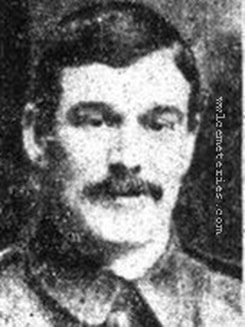 Son of the late Mr. A. Cotterill, of Lightwood, Longton; husband of Margaret McArthur Allan of Clifton Lodge, Shefford, Beds.

The information below supplied by 'The Ellesmerian Club', the alumni organisation for Ellesmere College where Arthur was a pupil.​

Arthur arrived at Ellesmere College in May 1902 and entered the ‘Heywood’ dormitory and Form Upper III, under the guidance of Mr. Fyffe and, over the next few years rose to enter the VIth Form. Academically, he was entered for the Preliminary Oxford Local Examinations in 1903 and passed in Arithmetic, Mathematics, Religious Knowledge, English Grammar and Geography. A year later he sat his Junior Examinations and was to pass in the same subjects, adding French and Drawing to his tally. He was awarded the Upper VI Form Prize in 1904.

Out of the classroom, it would appear that whilst he may not have been good enough to represent the college in various sports, he did play rugby (as a forward), cricket and football for his dormitory. He gained his swimming certificate in 1905 by swimming five lengths whilst wearing cricket flannels. Like most of the pupils, he was a member of the Officer Training Corps, playing as a bugler in the band and he gained his Marksman’s Colours in shooting.

He was a member of the Games and the Library Committees. He left on 17th December 1905 but there are no records to indicate his career path until he was gazetted 2nd Lieutenant, the North Staffordshire Regiment in September 1914. He had completed his application forms for a commission on 7th September and was proud to include his service in the college O.T.C. in the section ‘previous military experience’. He had also served with the territorial cadets since August 1911 – all of this experience would stand him in good stead with his application.

Records from the London Gazette show his rapid promotion to Lieutenant and thence to Captain, effective April 1915 but not gazetted until 1917, the year in which records show he married Margaret McArthur Allan. They set up home together at ‘Shooters Hill’, Longton, Staffordshire before Arthur was posted to the Western Front on 18th November 1917 – just four months later he would be dead.

Operation Michael’ was a German military operation that began the Spring offensive on 21st March 1918. It was launched from the Hindenburg line, in the vicinity of Saint-Quentin, France and the goal was to break through the Allied lines and advance in a North Westerly direction to seize the Channel ports. At 0435 hours, a heavy barrage opened up simultaneously along the entire 64 km. long Front and trench mortars, mustard gas, chlorine gas, tear gas and smoke canisters were concentrated on the forward trenches whilst heavy artillery bombarded the rear areas to try and destroy allied supply lines.

In excess of 3,500,000 shells were fired in five hours – the biggest barrage of the entire war – and the Allies suffered some 7,500 casualties from the bombardment alone. This was just the prelude to a day of intense and bloody fighting that was often hand to hand. During the first day most of the British Front line trenches were overwhelmed, and with communications almost non-existent Allied troops retreated.

It is highly likely that Arthur was killed during these actions as he was reported ‘missing presumed dead’ at Bullecourt that day. His military service records recognise the 21st March as his date of death even though his body was never recovered. He was one of the 34,795 servicemen with no known grave who are commemorated on the ‘Arras’ Memorial.

His life is also commemorated on the Longton Cenotaph in Staffordshire as well as on the War Memorial at Ellesmere College. 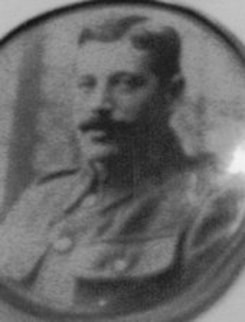 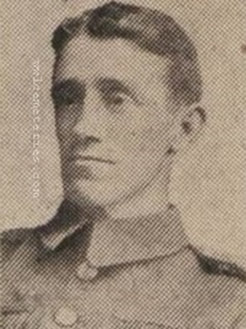 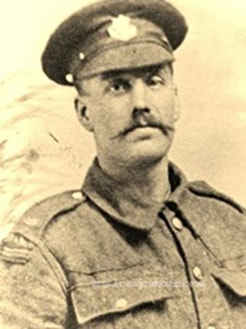 Cpl James Eccles (3/6919) of the East Yorkshire Regiment, who died on the 13th May 1917 in Arras, he was 37 years of age and left a wife Annie Eccles and 7 children. Before the war he worked as a Boiler Cleaner. He joined the 7th Battalion of the East Yorkshire Regiment in 1914 and was posted to France, he went missing in 1915 and was reported missing presumed dead. He later turned up in a French Hospital and was shipped back to Hull. He returned to the front and was killed in Action in 1917. 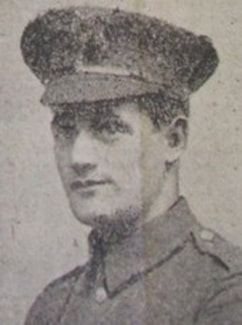 Formerly of the Pembrokeshire Police Force he was wounded on the 23rd March 1918 while leading an ammunition wagon up to the Guns. His wounds were dressed on site and it was believed his injuries where not too serious. His C.O. put forward his award for the M.M. for "his grand and brave work during the heavy fighting round Queant". Unfortunately he died of wounds received and never knew he was to receive the M.M. 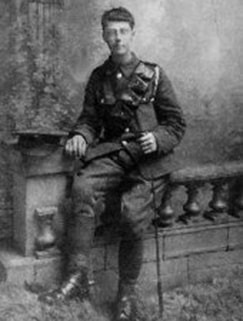 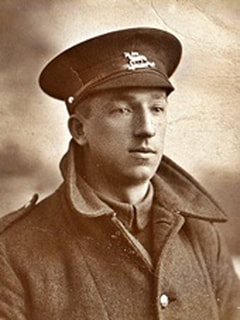 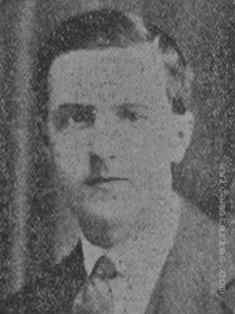 Miles was the father of two children and prior to enlisting was book-keeper and assistant foreman at Messrs. Hanson's Rosegrove Bottle works, Burnley. 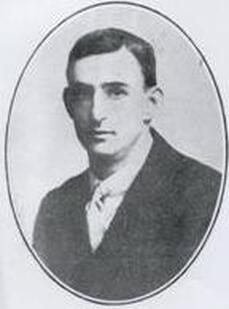 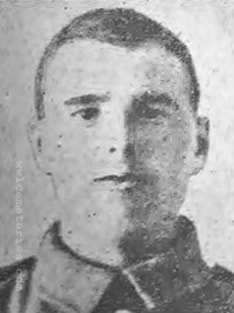 Prior to enlisting he was a weaver at Cowpe's Spa Mill, Whittlefield, Burnley. He enlisted on June 6th, 1916 and had been at the front for just 4 months when killed. 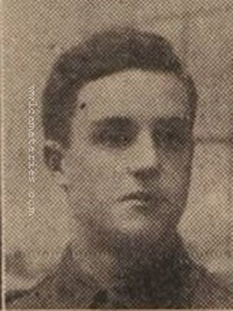 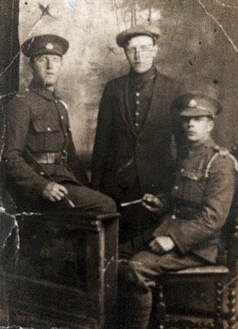 Thomas is the one seated left, his younger brother Walter centre and James.

Thomas was born in 1895, the eldest of 6 children to Harry and Julia Glenton of 2 Poplar Terrace, Rosamund Street, Hull. He was a fish trades worker. On 7th September 1914 aged 19, he queued at Hull City Hall to join the newly formed 11th Battalion East Yorkshire Regiment ‘The Tradesmen ‘ 2nd Hull PALS, his service number was 11/169. Thomas survived Egypt and the Somme but was killed in action at Vimy Ridge which I think was during the capture of Oppy Wood, on July 2nd 1917 aged 21. His body was not recovered and he is commemorated on the Arras Memorial. 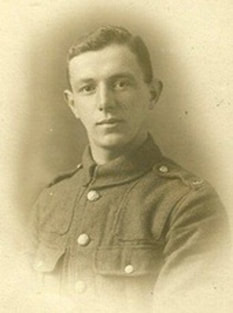 His captain wrote to his parents:

"The enemy had got round our flanks and we were forced to evacuate our line to another one a little further back, we were coming back when your son was hit by a machine gun bullet and killed instantly.  Owing to the Boshe being close on our heels we were unable to bury him, which we should have done had it been at all possible."

Picture courtesy of his nieces Audrey Goodrum and Margaret Harrison 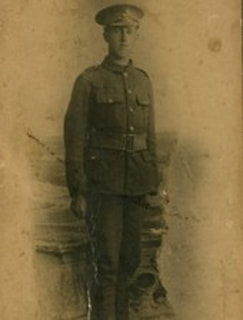 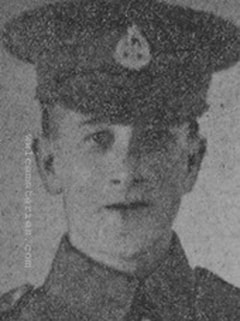 Son of James Crooky Graham and Mary Elizabeth Graham, of 9, Poets Rd., Cheapside, Burnley;  husband of Mary Ann Hacking (formerly Graham), of 92, Leeds Rd., Nelson, Lancs.
Rennie was married with one child, he enlisted at Burnley on 20th October 1916. Prior to this he worked as a fruit salesman with the Padiham Co-operative Society. He played half-back for the Padiham Lads Football team. 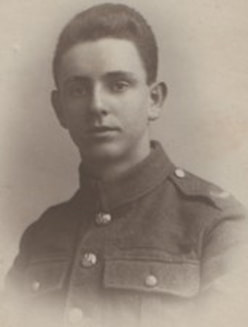 Youngest son of Joseph and Alice Grove of Fleetwood, Lancashire.

Remembered with Honour by Claire King