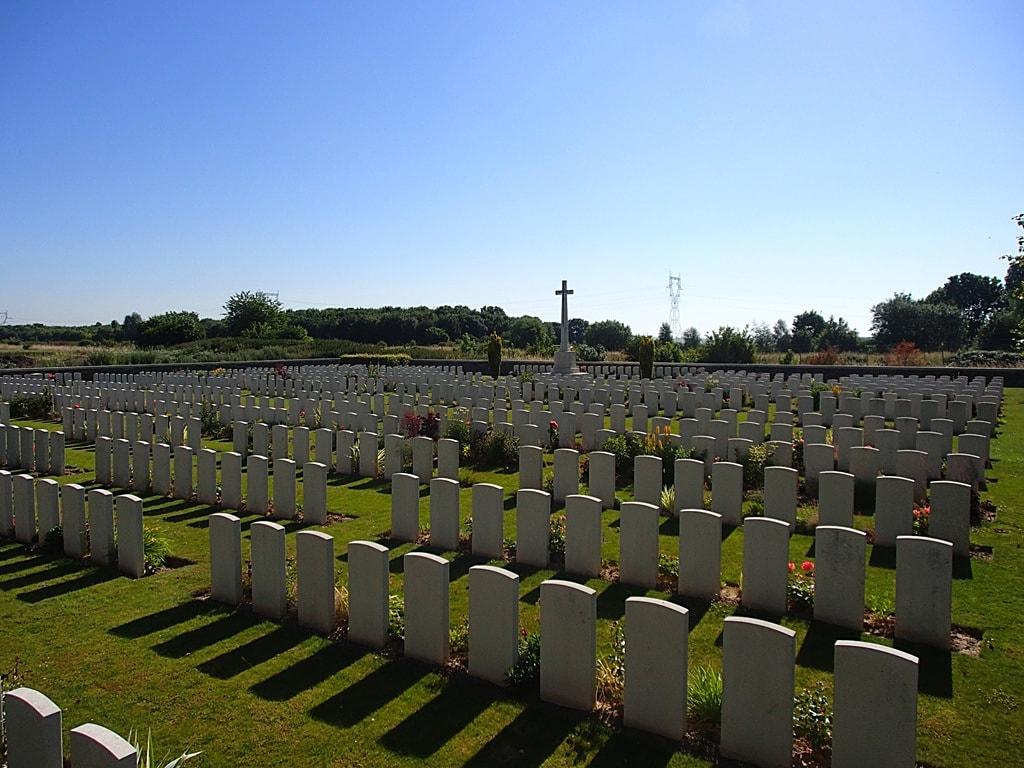 Assevillers is a village approximately 10 Kms south-west of Peronne.

Assevillers New British Cemetery will be found at the entrance of the village after crossing the A1 motorway and the high speed train line.

Assevillers was taken by the French in the autumn of 1916, evacuated by the Fifth Army on the 26th March, 1918, and retaken by the 5th Australian Division on the 28th August, 1918.

A number of cemeteries were made by the French troops at Assevillers, and in one ("E"), at the West end of the village, 13 soldiers from the United Kingdom were buried by Field Ambulances in February and March, 1917; they are now reburied in Fouquescourt British Cemetery.

Assevillers New British Cemetery was made after the Armistice by the concentration of graves from the battlefields of the Somme and from other burial grounds, including:-

There are over 800, 1914-18 war casualties commemorated in this site. Of these, two-fifths are unidentified and special memorials are erected to 25 soldiers and one airman from the United Kingdom, known or believed to be buried among them. Other special memorials record the names of nine soldiers and two airmen from the United Kingdom, buried in other cemeteries, whose graves were destroyed by shell fire.

The cemetery covers an area of 2,655 square metres and is enclosed by a stone rubble wall.

The cemetery covers an area of 2,655 square metres and is enclosed by a stone rubble wall. The cemetery was designed by Sir Edwin Lutyens & William Harrison Cowlishaw 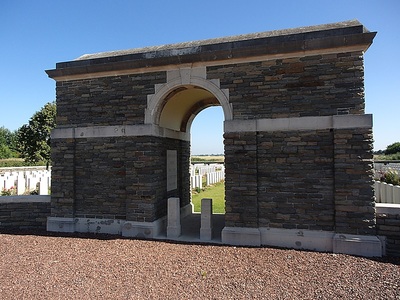 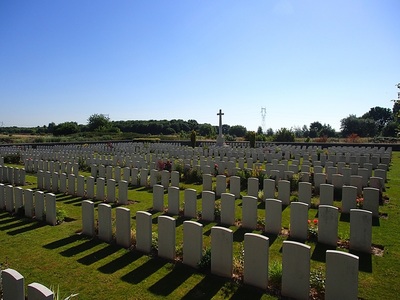 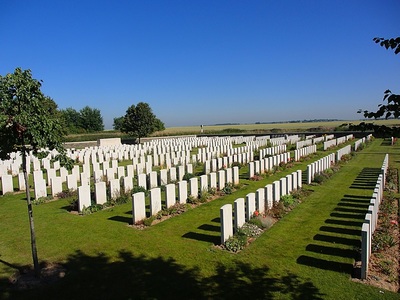 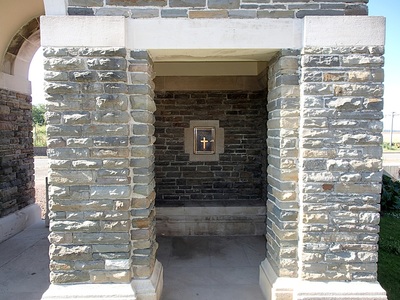 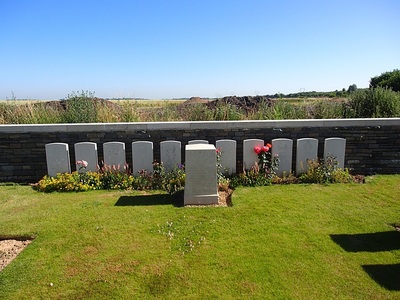 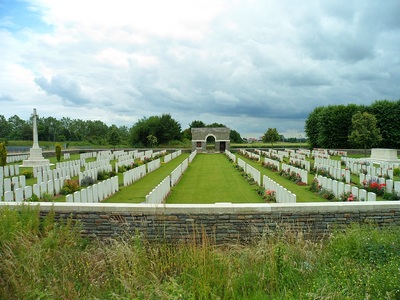 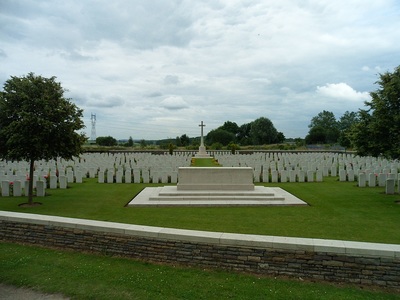 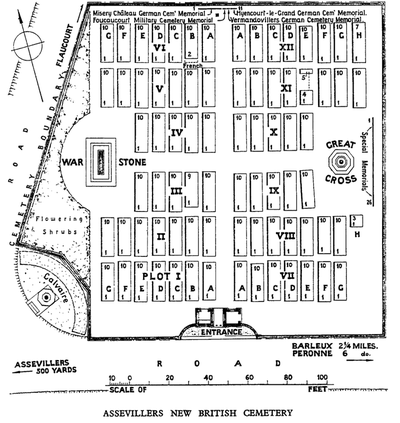 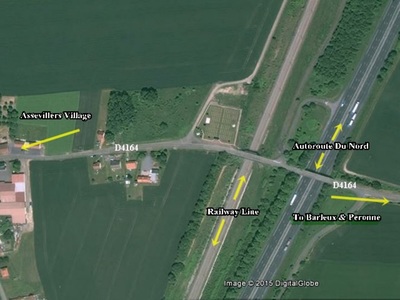 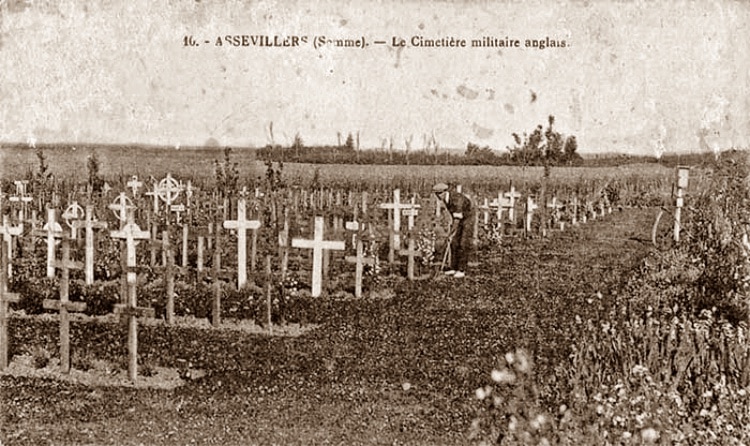 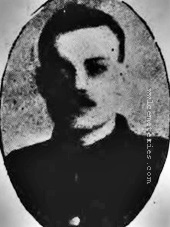 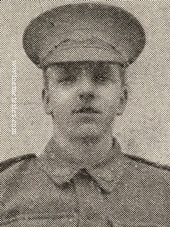 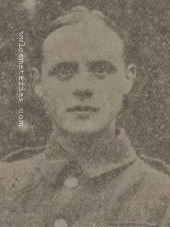 Son of Charles and Eliza Churchill, of Broadwindsor, Beaminster, Dorset. 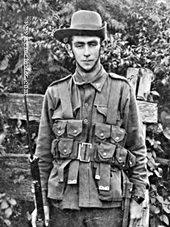 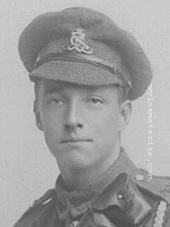 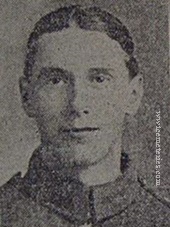 Warrant Officer Cecil Healy, the Australian Champion swimmer who was killed in action near Peronne on 29 August 1918. On 15 September 1915 Healy enlisted in the Australian Imperial Force and after service as a quartermaster sergeant in the Army Service Corps in Egypt and France he transferred to the infantry officer school at Trinity College, Cambridge, where he swam, rowed, boxed and played rugby. On 1 June 1918 he was commissioned second lieutenant in the 19th (Sportsman's) Battalion and was killed in his first action. Healy won a gold medal at the 1912 Olympic Games in Stockholm in the 4x200 m freestyle relay and a silver medal in the 100 m freestyle events. This slide is one of a series used in a 1917 recruiting campaign to encourage sportsmen to enlist in a sportsmen's unit, such as had been successfully raised in England. The concept was not as popular in Australia. 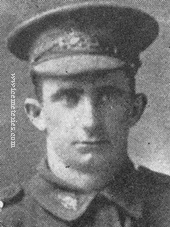 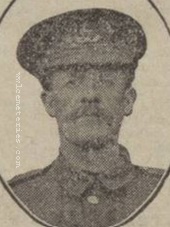 Husband of M. A. Sharratt, of Lower Gungate, Tamworth, Staffs. 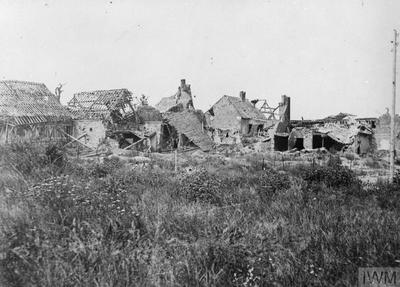 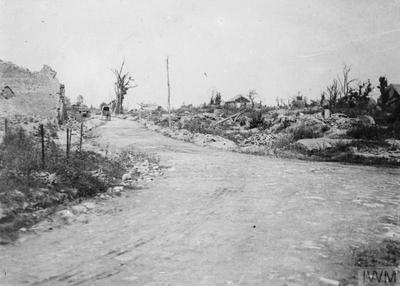 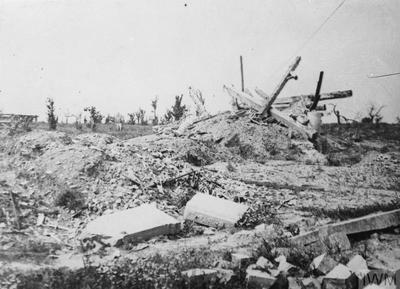 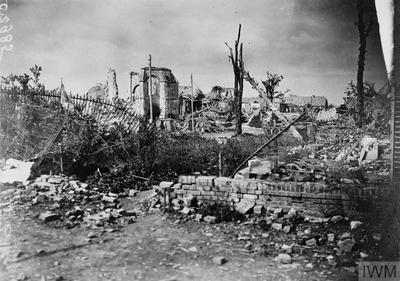 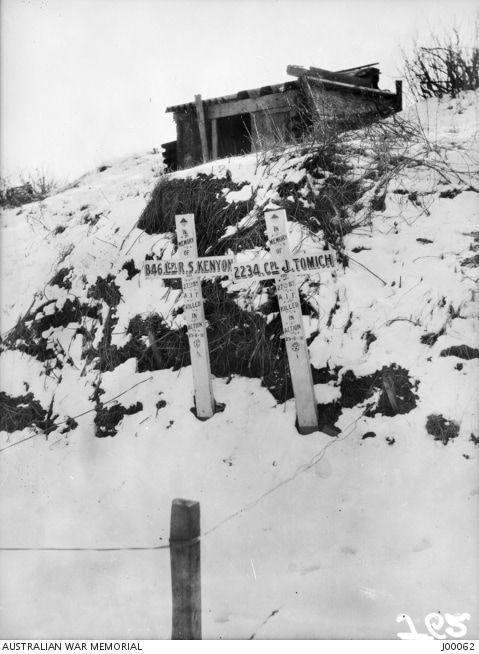 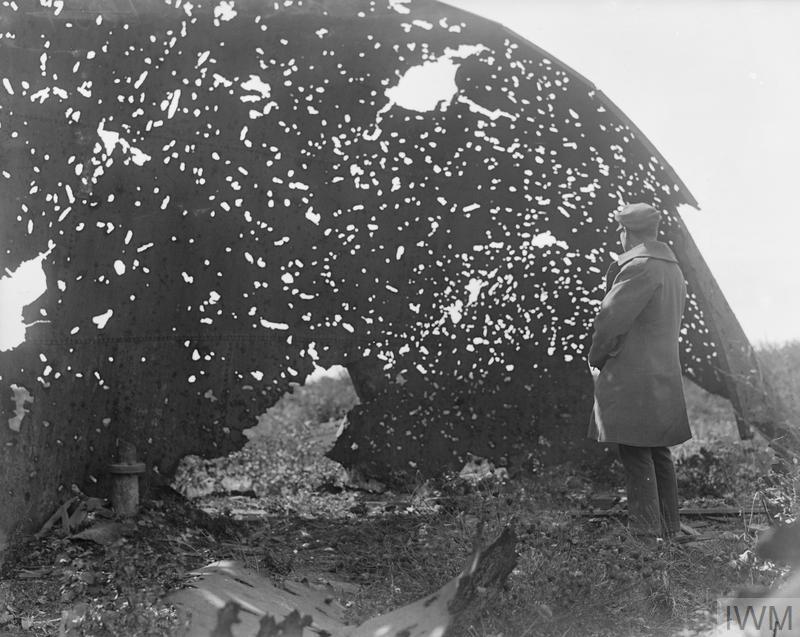 Holes in the remains of a factory boiler caused by shrapnel, Barleux, 20th September 1918. Barleux was retaken by 5th Australian Division on 29th August 1918. © IWM Q 9321 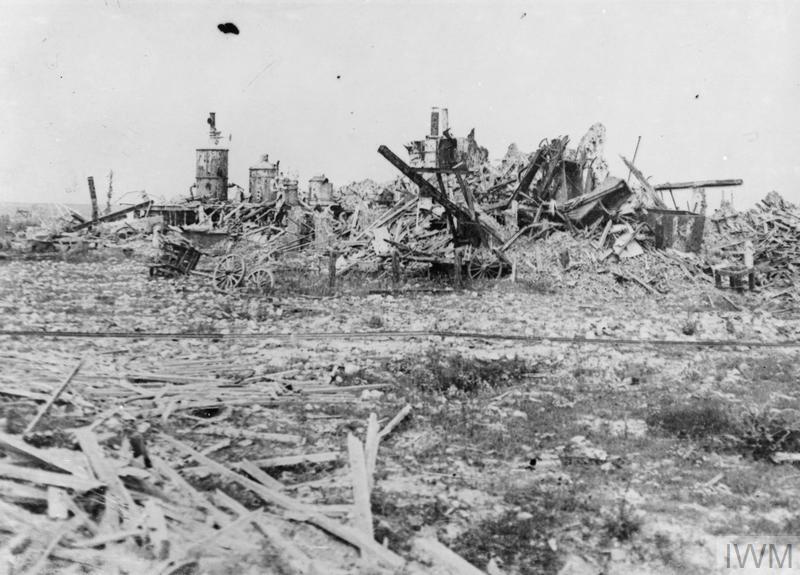 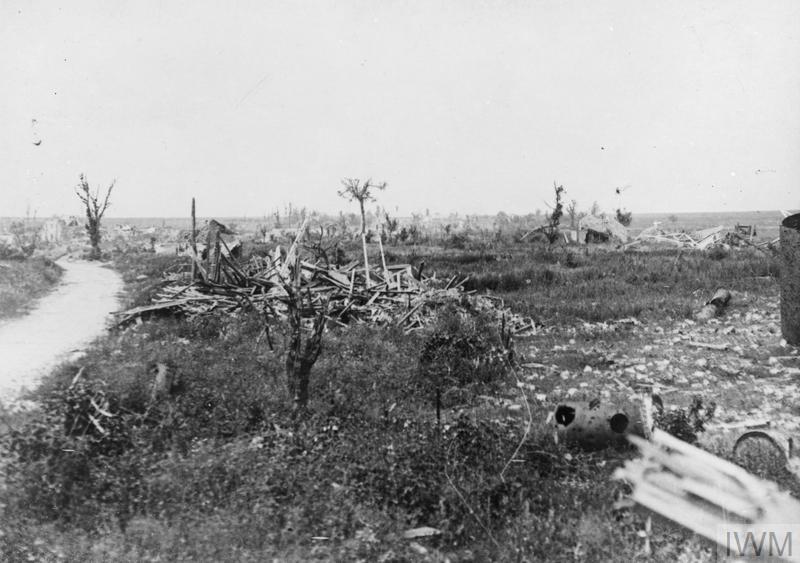 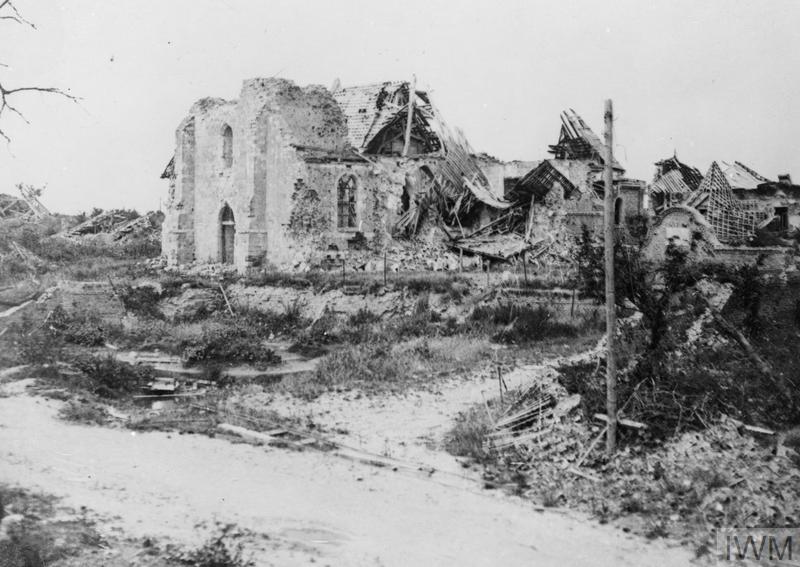 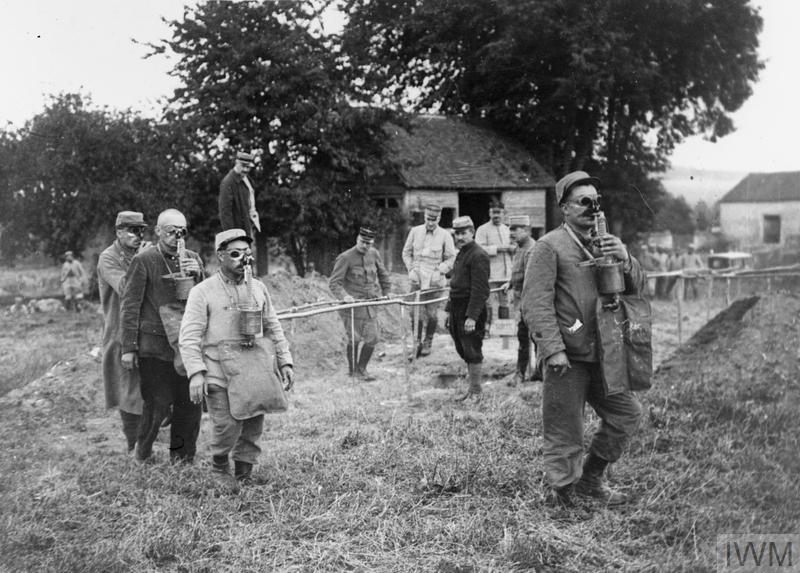