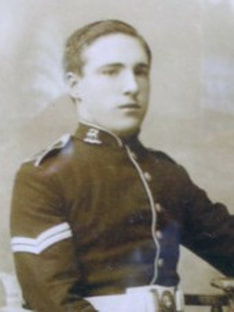 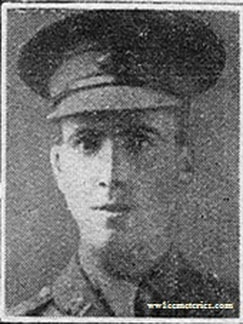 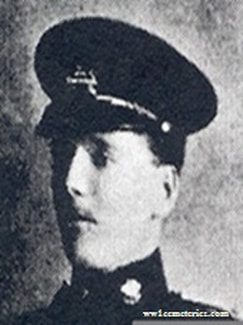 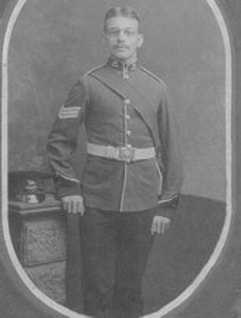 Picture courtesy of Ian White, grandson of this soldier 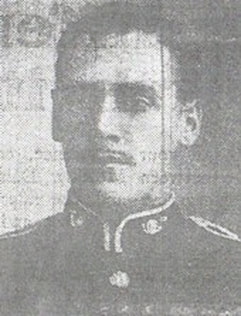 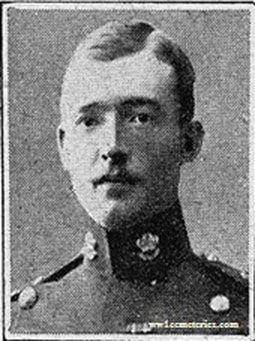 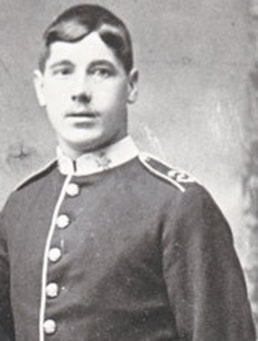 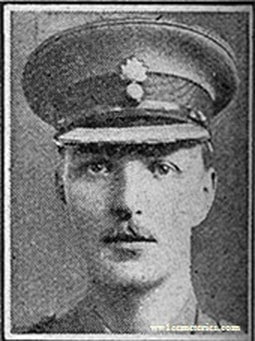 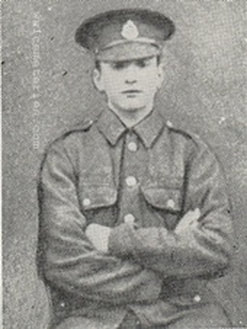 He lived at 14 Belgrave Street, Stoneyholme, Burnley. He was better known as Rayson. 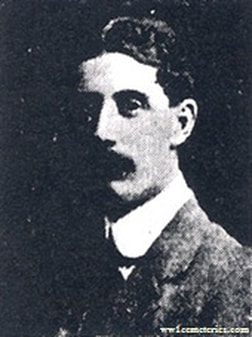 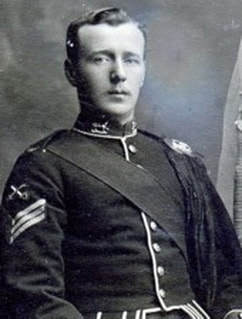 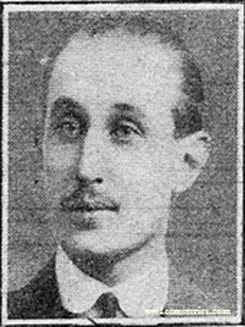 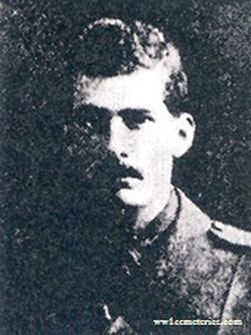 Son of James and Henrietta Grant Tennant, of Fairlie, Ayrshire 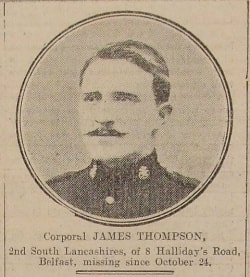 Son of Charles and Teresa Thompson, of 37, Annadale St., Antrim Rd., Belfast. One of 5 brothers who served. 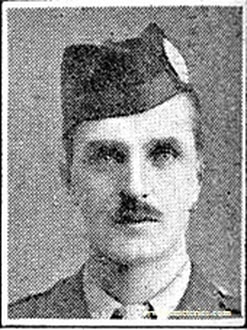 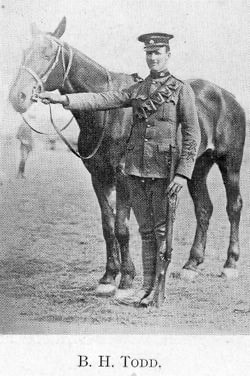 The information below supplied by 'The Ellesmerian Club', the alumni organisation for Ellesmere College where Benjamin was a pupil.

Benjamin Hall Todd and his military service is best described by his sister who, in a letter to her son, Peter Hall Dowse, in 1940 (held in the archives of Felsted College) wrote: He was delightful to look at, six feet tall and just your build & hands just like yours with eyes the colour of periwinkles, very deep set and otherwise supposed to be very like me and Aunt Dora. He was very clever & amusing, with a most witty way of saying things. He was at Felsted & was going into the Royal Marines & passed out top, in the Army qualifying exams. Then suddenly the powers that be decided to take all entrants at 13, like Dartmouth, and washed out all that year’s candidates, who were 17 and over, which was rotten luck. Grannie could not afford Sandhurst, and he just cheerfully switched over to engineering which he was very keen on & very soon was a junior partner with Dick archer in Dublin, who was the agent for Cadillacs and Fords. He joined the South Irish Horse, in the Special Reserve and used to go training with them on every possible occasion. He was a wonderful rider & shot & won all sorts of cups and prizes. Then come the War, & the SIH was almost the first regiment to go out to France. He was all through the retreat & came back on leave, looking marvellous and handsomer than ever. They were alongside the grenadier Guards who were having a bad time from snipers & his fame as a shot had got around so the Colonel asked him to be transferred to them. He and his friend Cecil both went to the King’s Company of the Grenadiers & very soon Neuf Chapelle pretty well wiped out the regiment. The day after Uncle was reported missing, an order came through offering him a commission in the Grenadiers, as he had done so well. We never knew till months afterwards that he was killed, as there were so many casualties. He was killed beside the leading Officer, as they charged out of the trench. You would have loved him, as you have so many things in common. In his spare time he also qualified in surveying at the College of Science & his drawings are still lying there. He drew beautifully and had a most lovely singing voice. He used to sing all the solos at school, and used to do all the girls, parts in the plays, when he was smaller as he looked ravishing in a wig, much to his annoyance. He was a very good mimic, like father, and used to make me cry with laughter.

Benjamin arrived at Ellesmere College in the summer of 1902 and stayed until the end of the Michaelmas Term 1905. He was in the ‘Alfred’ dormitory and in Form Lower II under Mr. Murray. Although he was not an overt sportsman, he did play rugby and football for his dormitory, he was a member of the Chapel Choir and he took part in the major dramas that the college produced in the late autumn.

His major role came in his first year when he was ‘Mistress Ford’ in “The Merry Wives of Windsor” (1902). He received modest praise for his endeavours for the drama critic of The Ellesmerian notes that it is: “impossible to train any young boy to simulate the action and emotions of the gentler sex.” Thereafter he was a servant to Portia,” The Merchant of Venice” (1903), an outlaw “Two Gentlemen of Verona” (1904), and Balthazar “Much Ado About Nothing” (1905). His singing in his last appearance was described as: “melodious and very distinct, although lacking a little in confidence.” He also appeared in an end of term farce produced by the prefects as ‘Angelina’ wearing a rather curious costume, the headgear of which was “particularly strange.”

He was a drummer in the Officer Training Corps and his shooting in the class firing was graded as “very good”for which he was awarded his Marksman’s Colours.

In December 1905 Benjamin Left the college and the next month he was admitted to Felsted College where he was to remain for the next two years. Records held there show he left in July 1908 , to general regret. He was a member of the Shooting VIII. His ambition was to join the Army, but he left too young, and returning to Ireland his adventurous spirit took him, after many vicissitudes, into the Constabulary

Benjamin Hall Todd (Senior), a stockbroker and Abigail Hogg Duncan were married in Rathdown, Ireland in 1887 and the birth of Benjamin Hall (Junior) on 13th May 1890 is registered there. The family lived at 32, Crosthwaite Park, East Kingstown. However, the couple separated. Years later, Mab, Hall’s sister wrote to her son and said her father was very goodlooking, with very blue eyes, and perfect features, not very tall, but beautifully built, good at all sports & yachting & fishing and shooting. Unfortunately, his attraction was his undoing, as he was too fond of wine, women and song, as it was rather the rage to be among the smart men of the day. He sang very well and played the violin. In fact, he did everything rather well.

The 1901 and 1911 Ireland Census’ show the parents living at different addresses. In 1911 Abigail was resident at 3, Glasthule, Dublin with Benjamin and his sister, Mary Abigail – known throughout her life as ‘Mab’. The document shows that Benjamin (listed simply as ‘Hall’) was 20 years old, single and employed as a motor engineer.

Benjamin, more often known by his middle name ‘Hall’, enlisted in the South Irish Horse, a Special Reserve cavalry regiment of the British Army , before the outbreak of war as, in 1913, he was awarded the Lord Decies Cup for being the best shot amongst the recruits. A year later he took the same award for being the best shot in the regiment. This was not surprising as he was a civilian member of the Dublin Civil Service Rifle Club and already held the Barton Challenge Cup as well as the Dudley Challenge Cup.

Hall took part in the early stages of the war (embarking for France on 17th August 1914) for he was awarded the 1914 Star, which was only given to those who took part in the actions of those early days. He went to the Front with ‘D’ Troop of the South Irish Horse and was involved in the retreat from Mons. Initially, he was a Corporal (Service No: 724) and transferred, to the King’s Company, 1st Battalion, the Grenadier Guards on 3rdFebruary 1915, just in time for the battle of Neuve Chapelle. Documents held at Felsted College show he showed great spirit on his part to leave the Irish Horse, where no doubt he had many friends and a position as Corporal to join the Grenadier guards as a Private.

This was the first set piece British battle designed to remove the German salient in the area of Neuve Chapelle.  A surprise infantry attack on 10th March, after an initial heavy artillery bombardment, captured the village quickly but the success was not fully exploited due to primitive communications. After three days bitter fighting the stalemate returned. Hall had fallen on the first day of the fighting. His body was not recovered and he is remembered at the Le Touret Memorial. He was just one of the 1,427 Allied servicemen who lost their lives on that day. Military reference sources state that they took up reserve positions near Neuve-Chapelle – Rue de Bacquerot and Cameron Lane and attacked the next day. Heavy casualties while crossing Rue Tilleloy.It is thought that Hall was one of these casualties.

His mother received a letter from an Officer that survived. He wrote: I am sure the Captain, as well as our Officers, who were all killed except myself, would have wished you to know how well he had done. The Regiment lost 14 Officers and 328 Other Ranks in the battle.

Hall was awarded the Victory Medal, the British War Medal and the 1914 Star for his military service.

His life is commemorated on the War Memorials at Le Touret, Pas-de-Calais and at Ellesmere College. His name is also recorded in the Roll of Honour displayed at Christ Church, Kingstown. 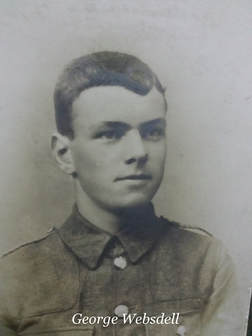 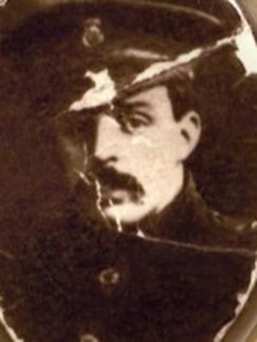 "With love, from your son Sam" 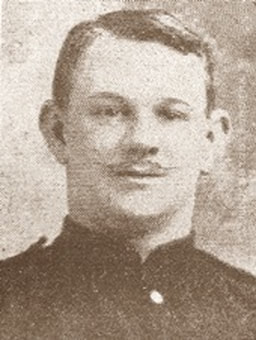 Son of Mrs. M. Winterbottom, of 135, Briercliffe Rd., Burnley, Lancs.
​
A Drawer at Clifton Colliery in civilian life. He was Mentioned in Despatches for the action in which he was killed. Having survived the British attack on the German trenches, he went back out and brought a wounded man to safety, he then went out once more to assist another man but was shot in the head whilst trying to pick him up.