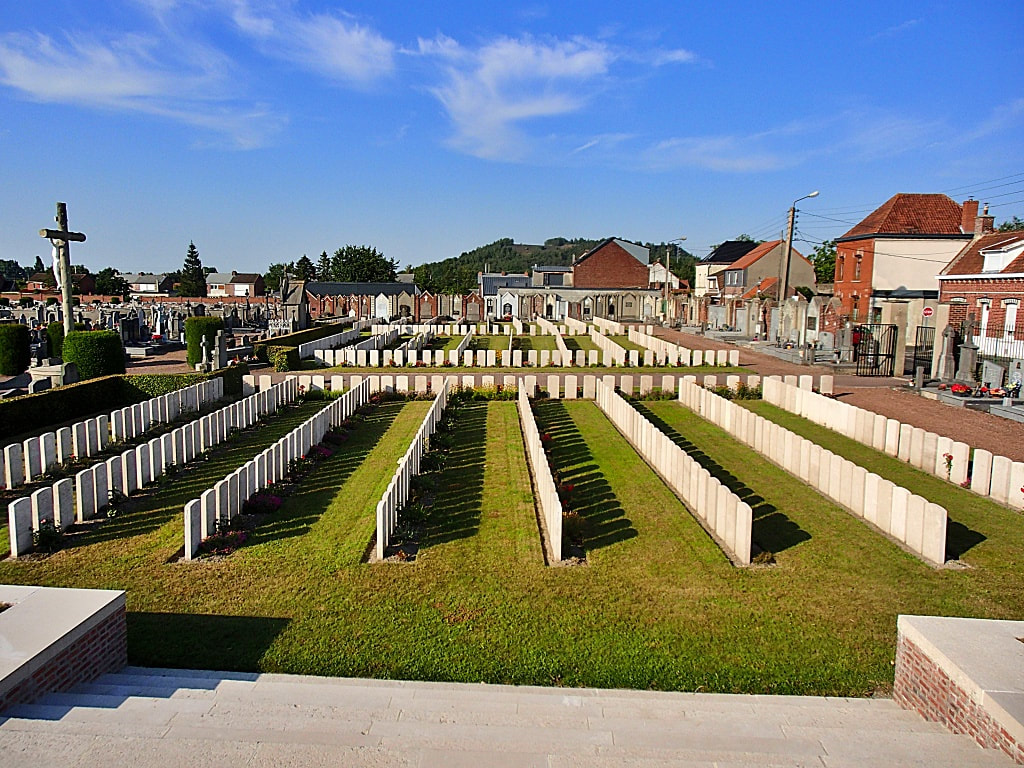 Noeux-les-Mines is a town 6 kilometres south of Bethune on the main road to Arras.

The Communal Cemetery is on the northern side of the town, on the south-east side of the road to Labourse.

The COMMUNAL CEMETERY at Noeux-les-Mines was used by the Commonwealth forces (in succession to the French) from June 1915 to August 1917. The earlier burials were carried out by units and field ambulances but in April 1917, the 7th Casualty Clearing Station began to use the cemetery. It contains 980 Commonwealth burials of the First World War.

The EXTENSION was begun in August 1917 and used until December 1918, chiefly by the 6th and 7th Casualty Clearing Stations. It contains 304 Commonwealth burials of the First World War and 12 German war graves. 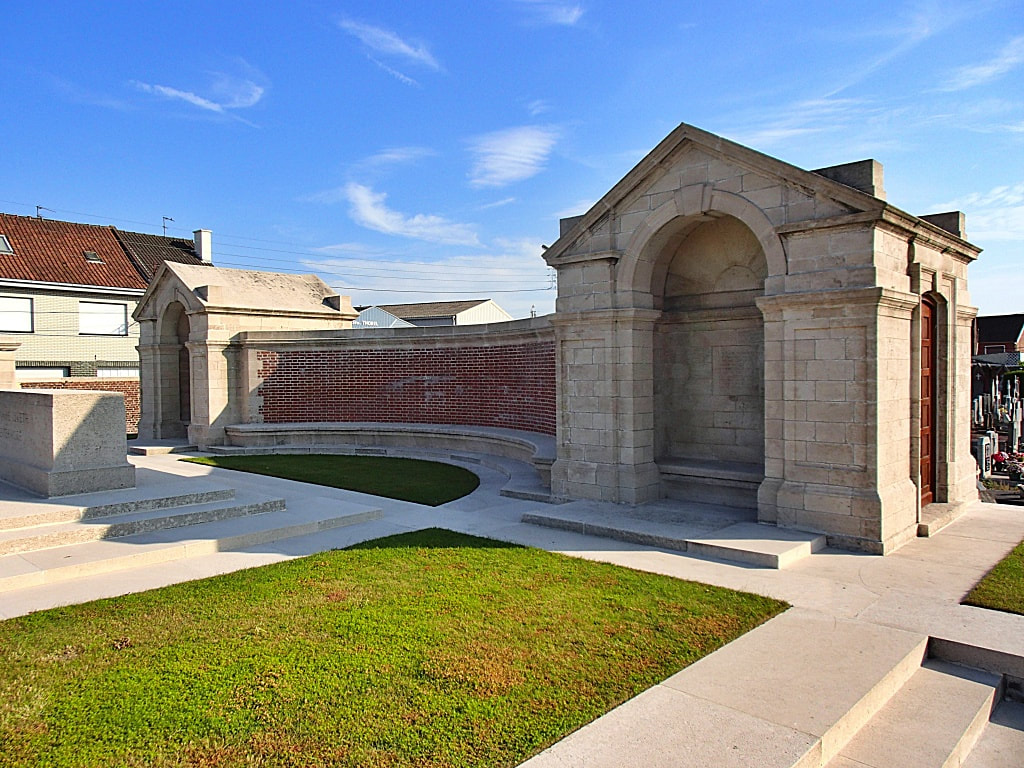 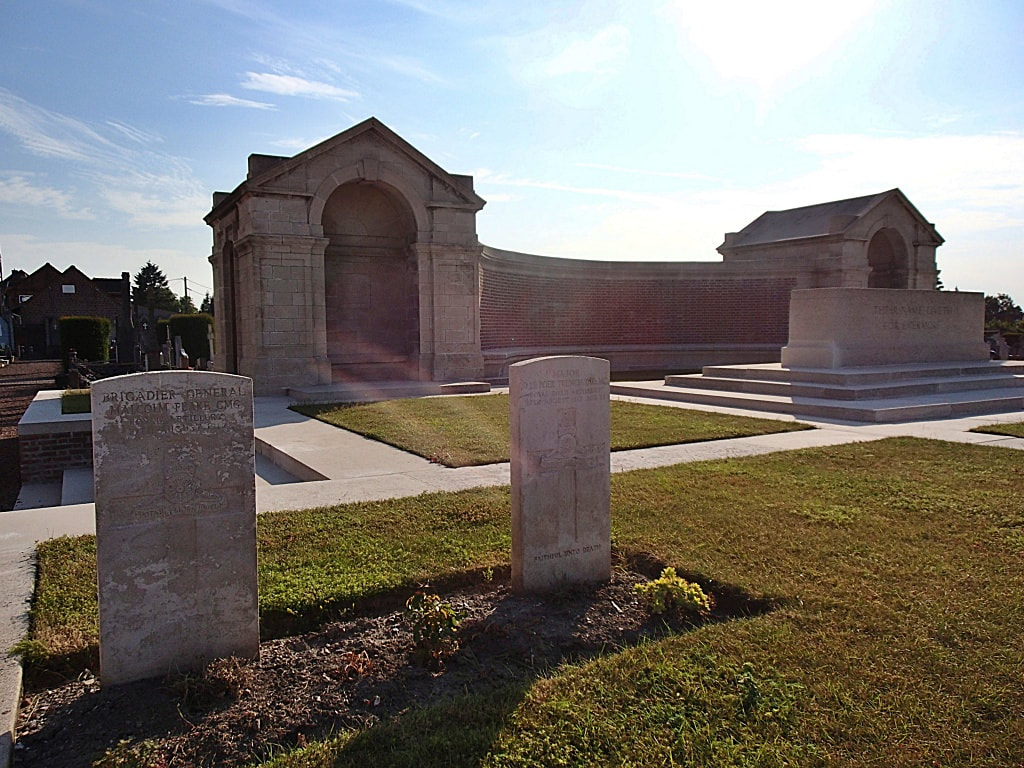 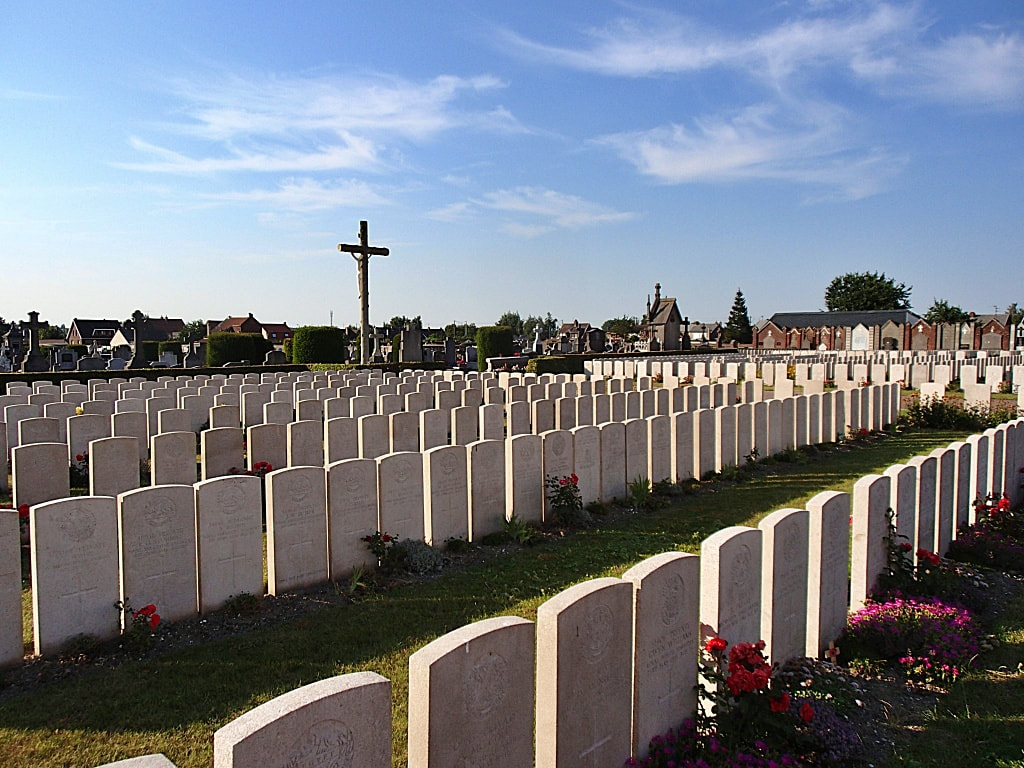 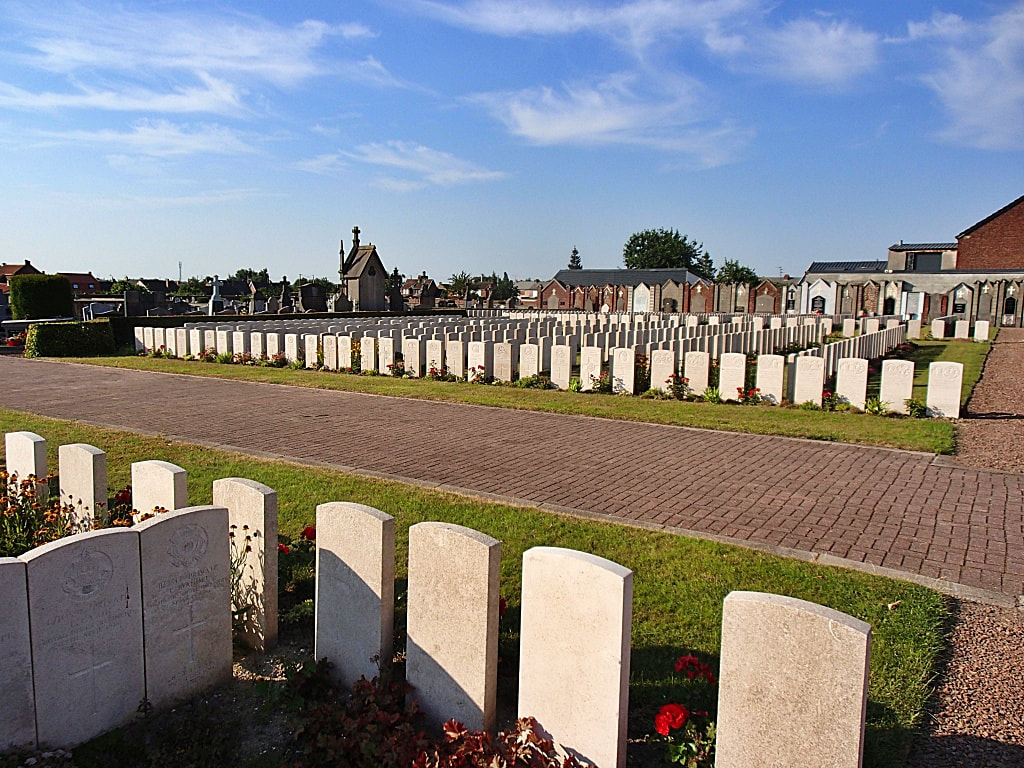 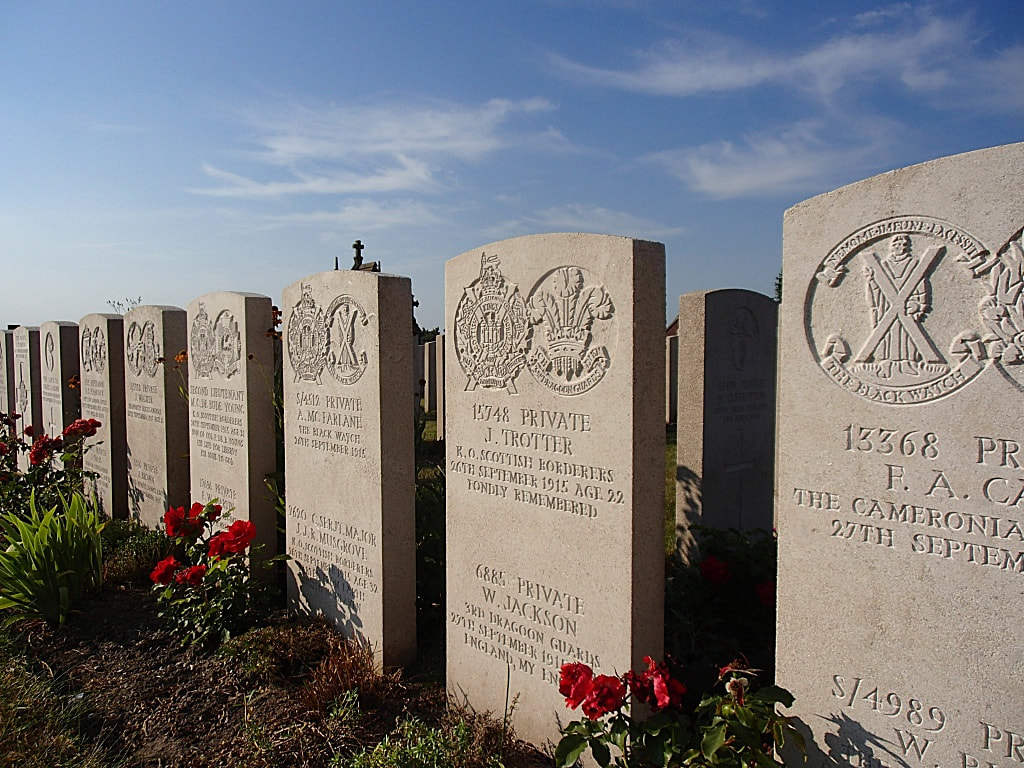 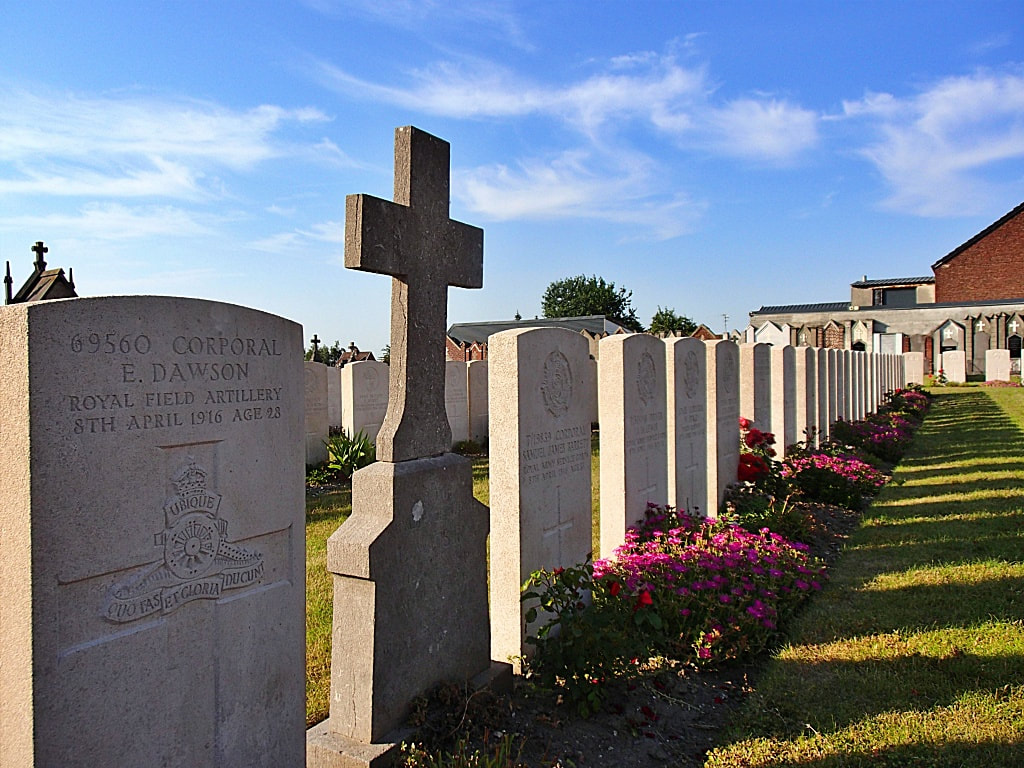 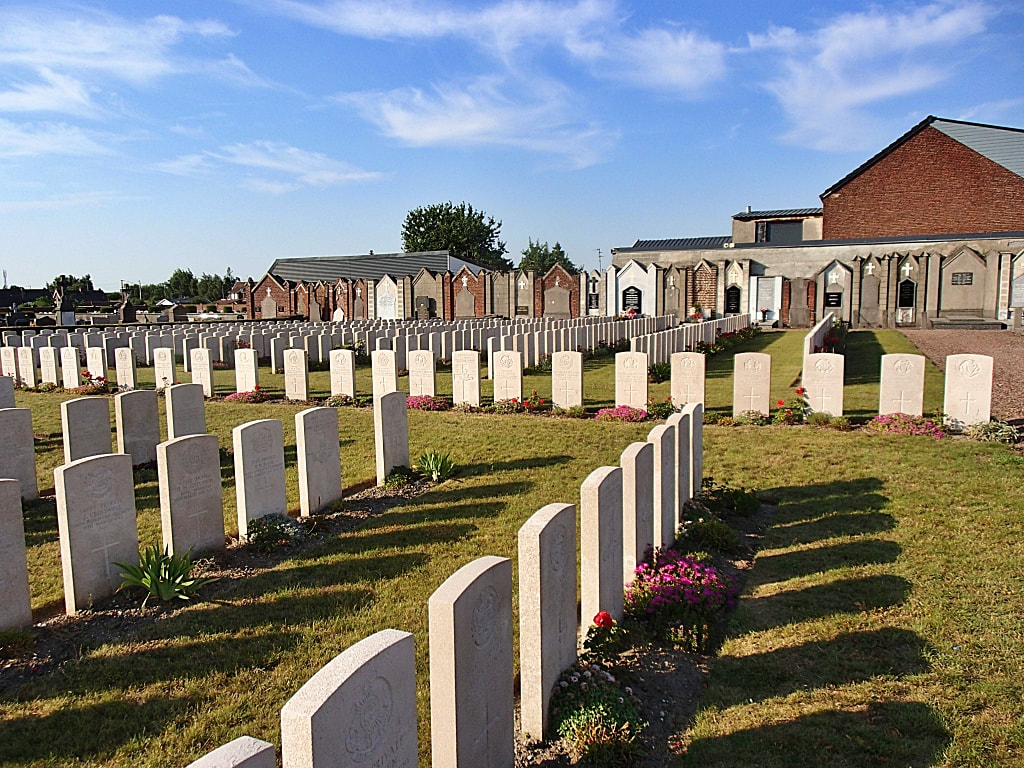 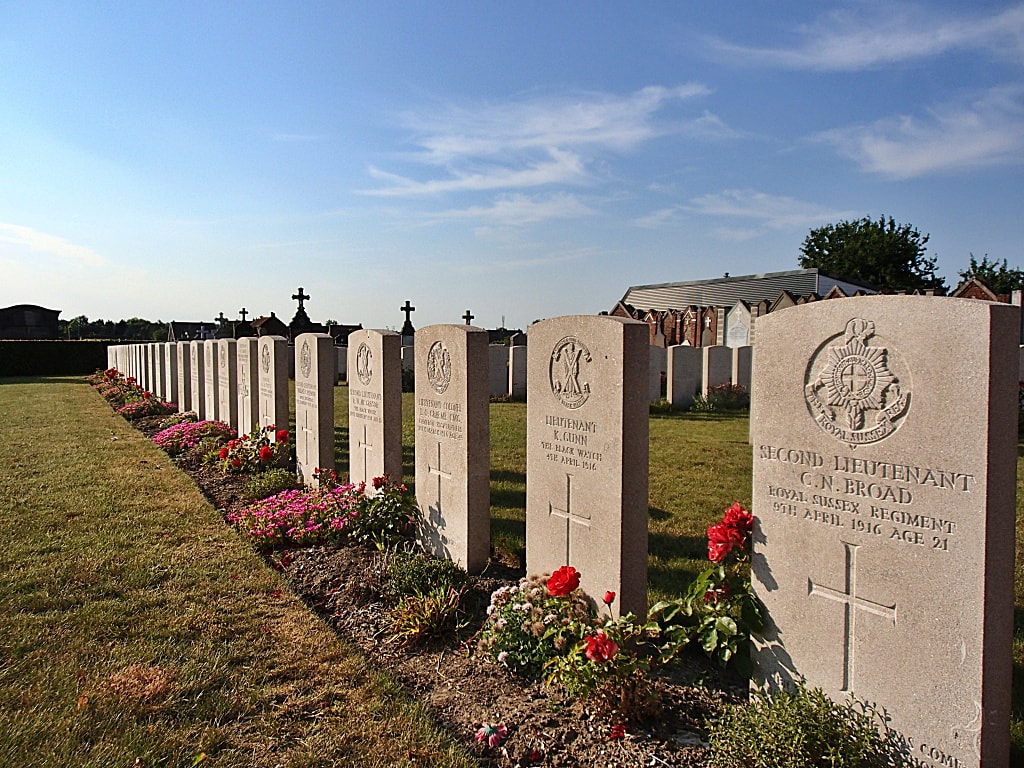 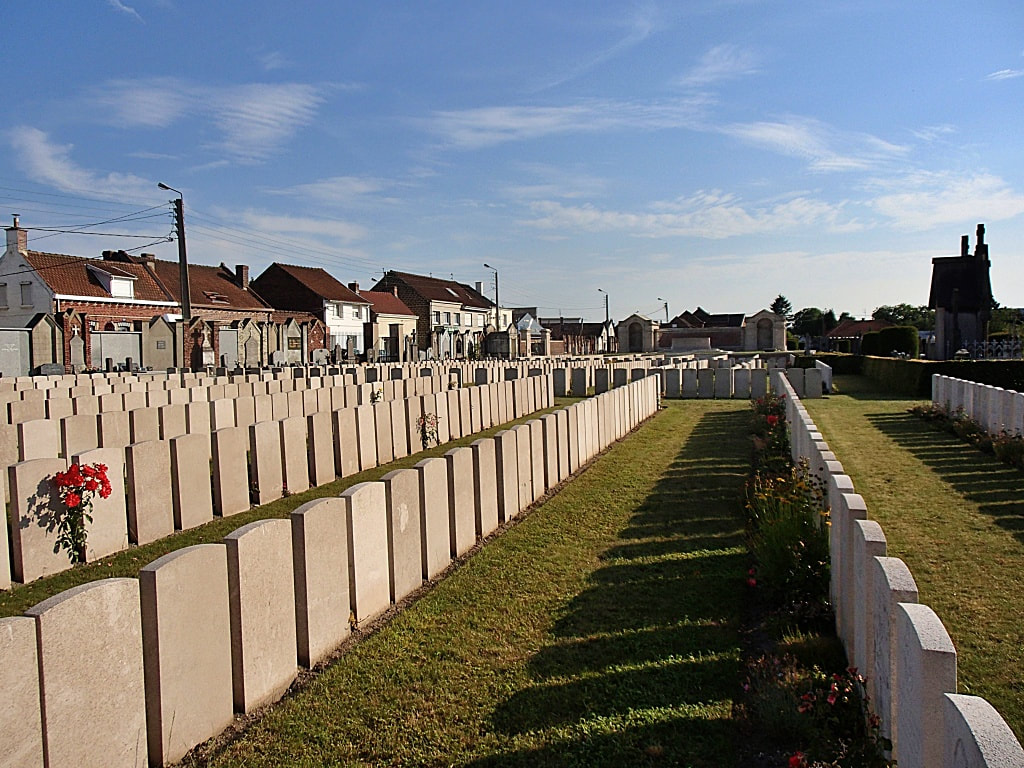 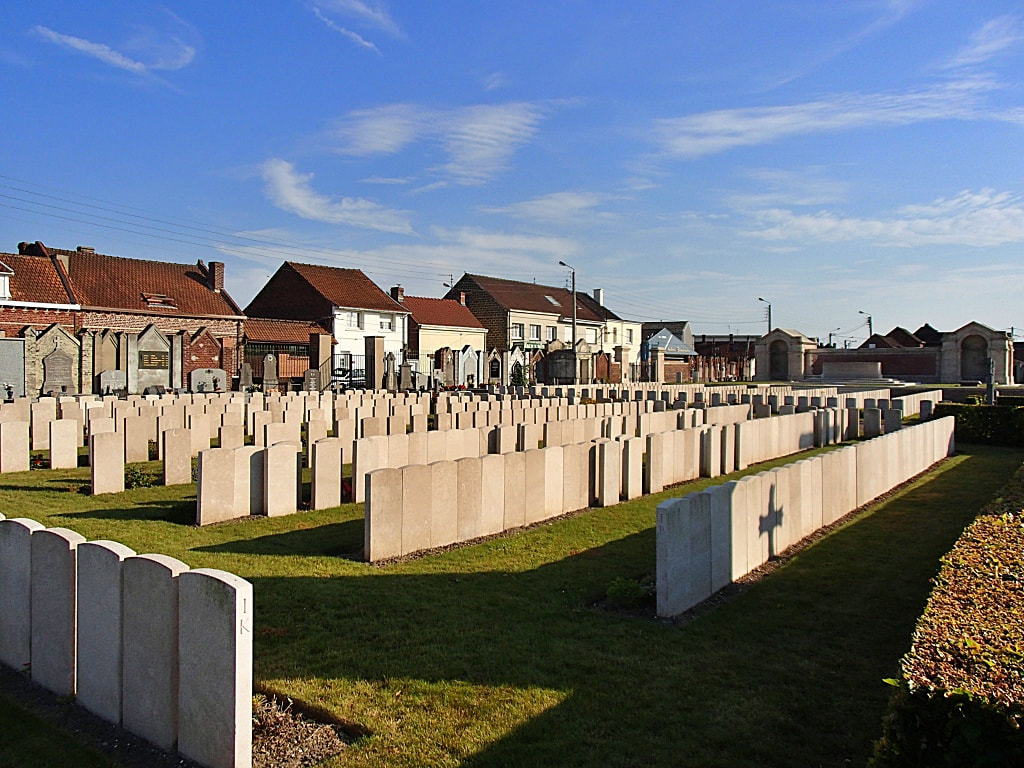 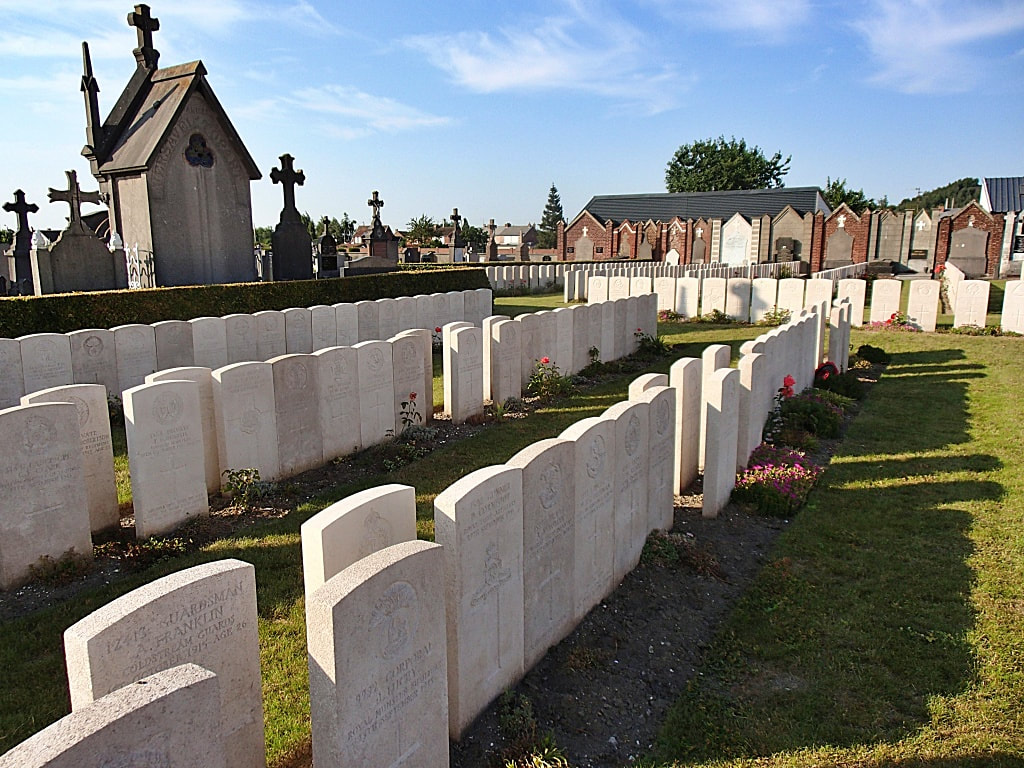 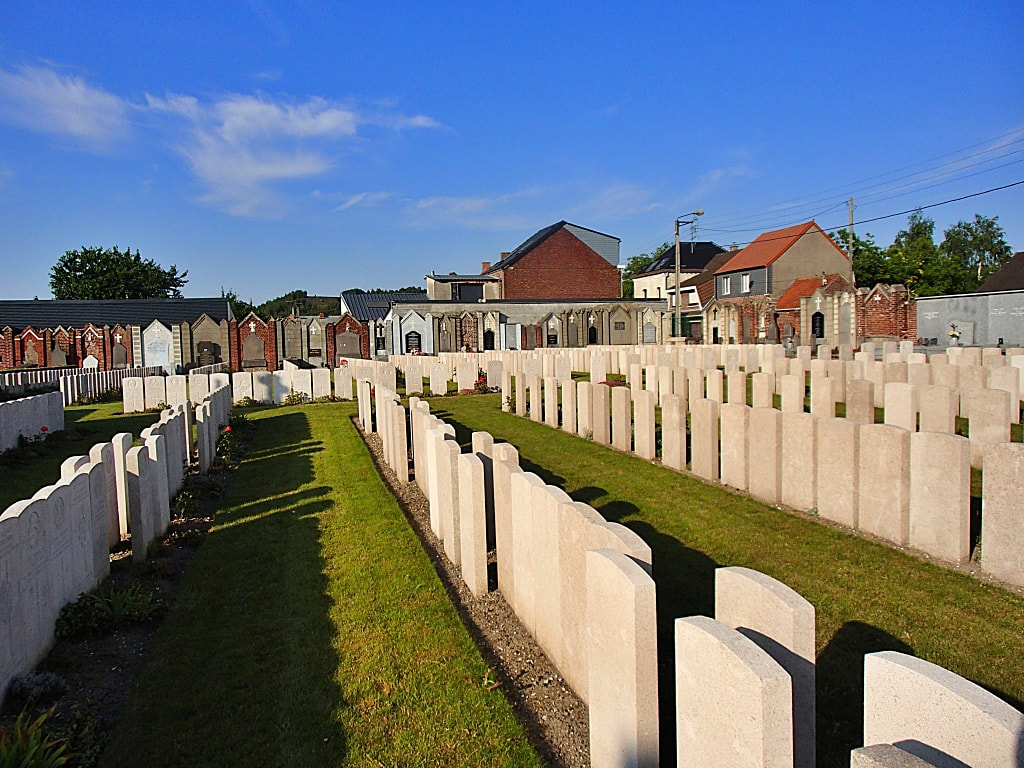 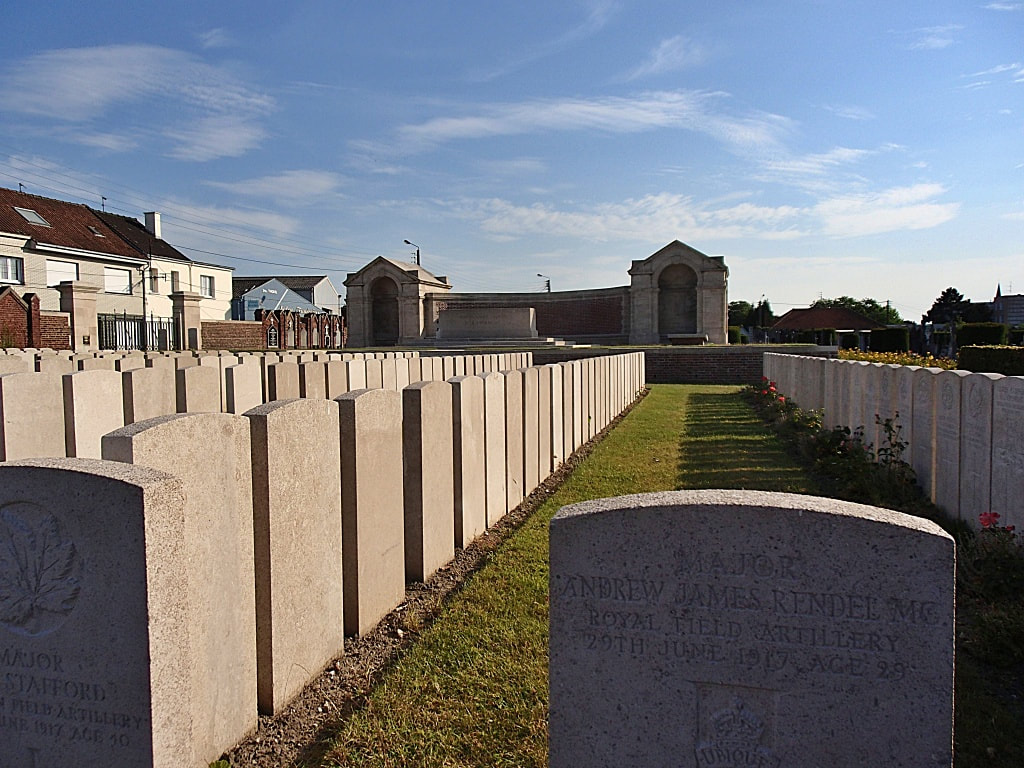 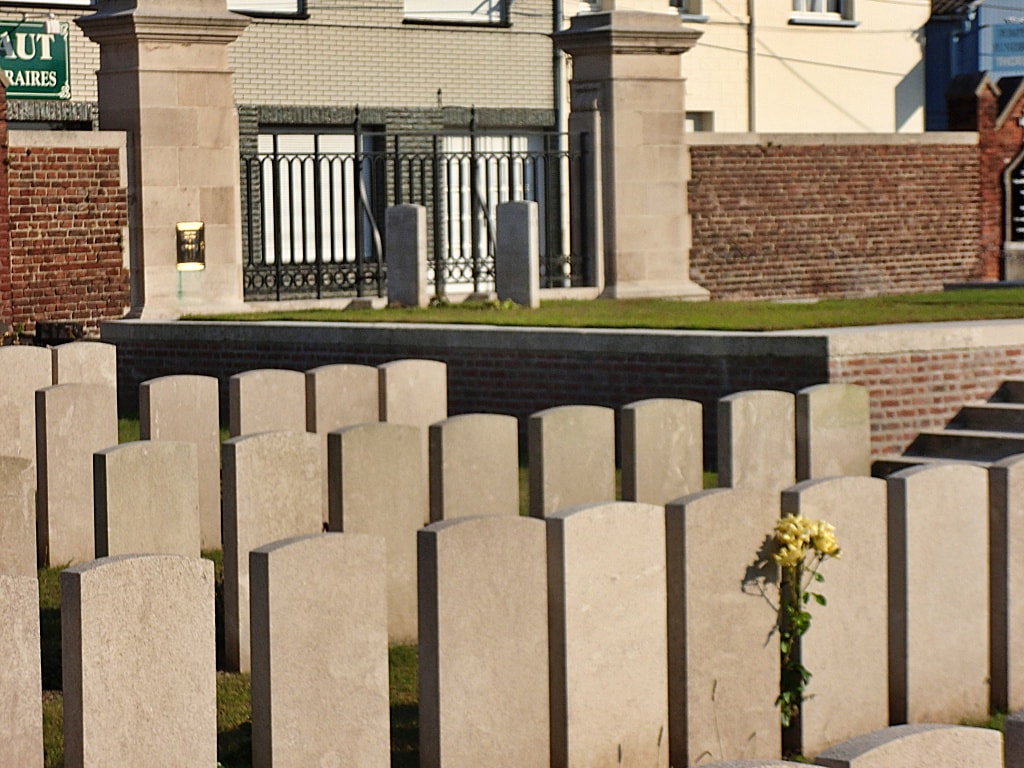 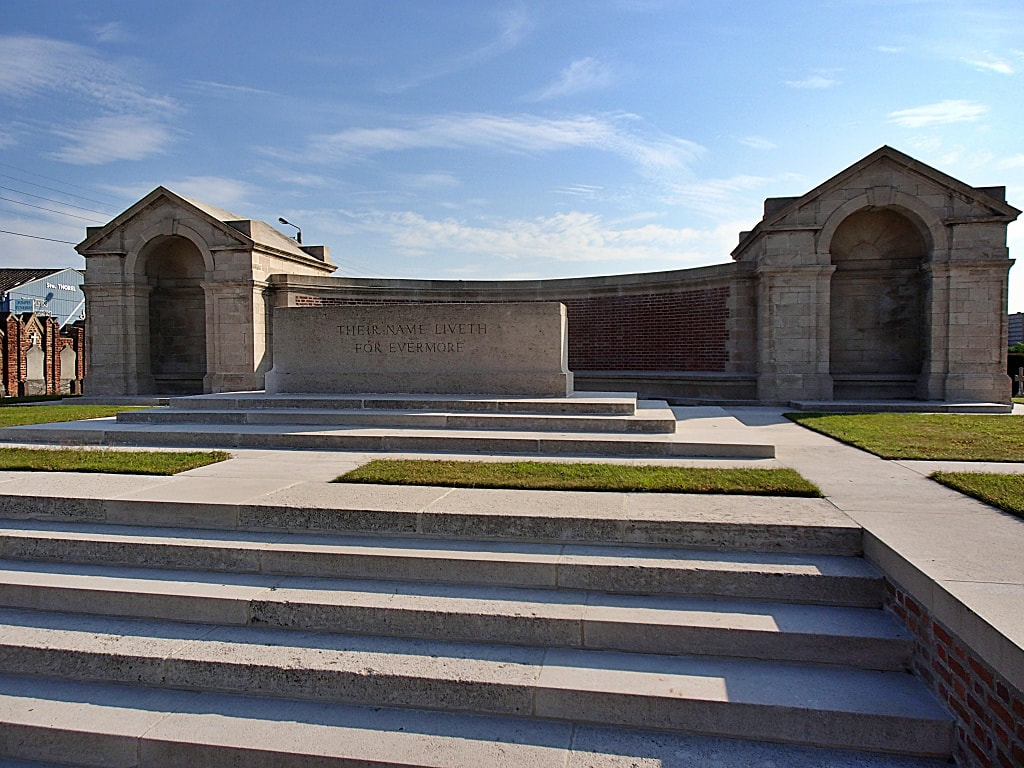 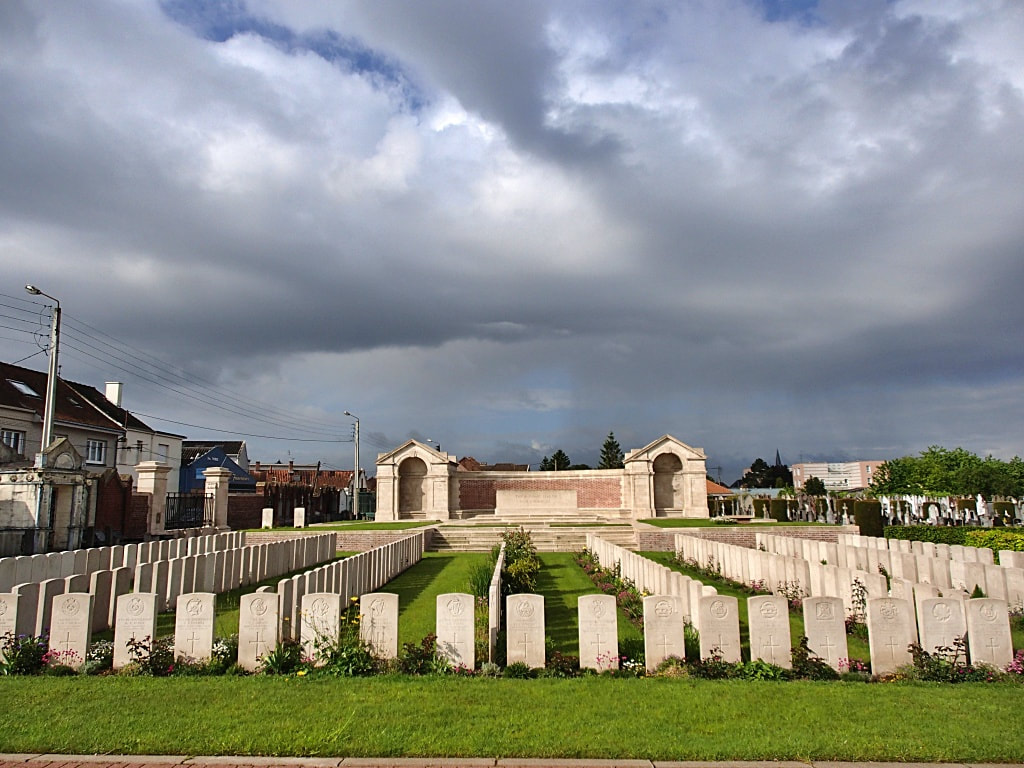 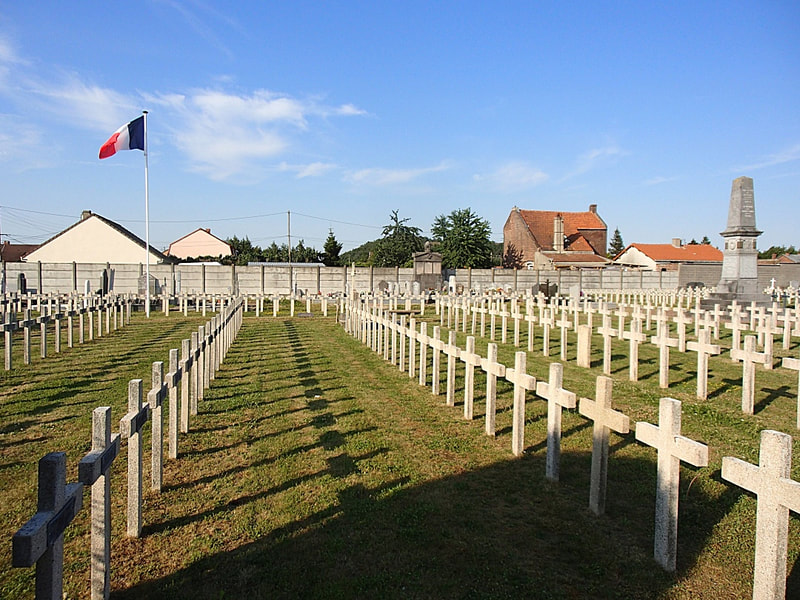 Son of Mrs. Helen McAuliffe, East Emily, Ontario. He stated he was employed as a farmer and was single. The town of Gananoque and the Gananoque Legion will be displaying Brown's original Victoria Cross at the Legion in August 2007 to mark the 90th anniversary of the action which earned Brown the award. Also planned is a cairn to Pte. Brown.

An extract from "The London Gazette," No. 30338, dated 16th Oct, 1917, records the following: "For most conspicuous bravery, courage and devotion to duty. After the capture of a position, the enemy massed in force and counter-attacked. The situation became very critical, all wires being cut. It was of the utmost importance to get word back to Headquarters. This soldier and one other were given the message with orders to deliver the same at all costs. The other messenger was killed. Private Brown had his arm shattered but continued on through an intense barrage until he arrived at the close support lines and found an officer. He was so spent that he fell down the dug-out steps, but retained consciousness long enough to hand over his message, saying ' Important message.' He then became unconscious and died in the dressing station a few hours later. His devotion to duty was of the highest possible degree imaginable, and his successful delivery of the message undoubtedly saved the loss of the position for the time and prevented many casualties

Only son of Mr. and Mrs. William Learmonth of St. Louis Road, Quebec.

​An extract from the "London Gazette," No. 30372, dated 6th Nov., 1917, records the following:-"For most conspicuous bravery and exceptional devotion to duty. During a determined counter-attack on our new positions, this officer, when his company was momentarily surprised, instantly charged and personally disposed of the attackers. Later he carried on a tremendous fight with the advancing enemy. Although under intense barrage fire and mortally wounded, he stood on the parapet of the trench, and bombed the enemy continuously and directed the defence in such a manner as to infuse a spirit of utmost resistance into his men. On several occasions this very brave officer actually caught bombs thrown at him by the enemy and threw them back. When he was unable by reason of his wounds to carry on the fight he still refused to be carried out of the line, and continued to give instructions and invaluable advice to his junior officers, finally handing over all his duties before he was evacuated from the front line to the hospital where he died."
​ 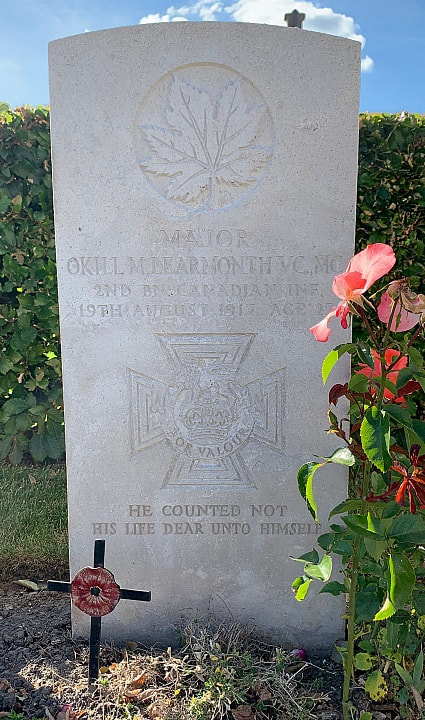 S/2889 Private Francis Murray, 9th Bn. Gordon Highlanders, attached Royal Engineers, executed for murder ist October 1916. Plot I. P. 2. Son of William Murray, of 2, Welsh Row, Calderbank, Airdrie. He was executed in October 1916 for a double killing, but no further detail is available except that the offender (from a Pioneer battalion) had been in France since July 1915, being attached to the Royal Engineers at the time of his crime(s).  (Putkowski,p 116) 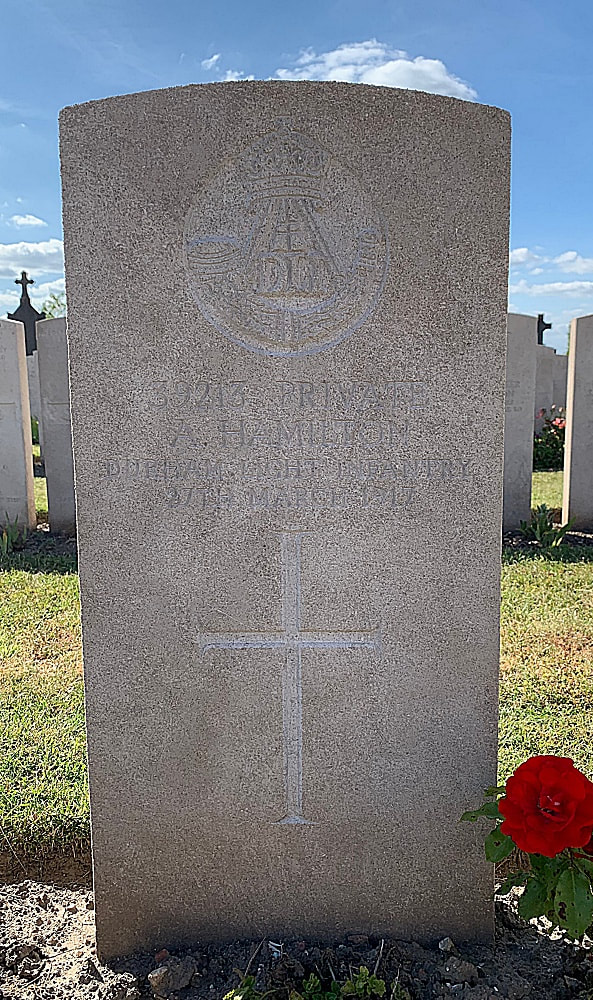 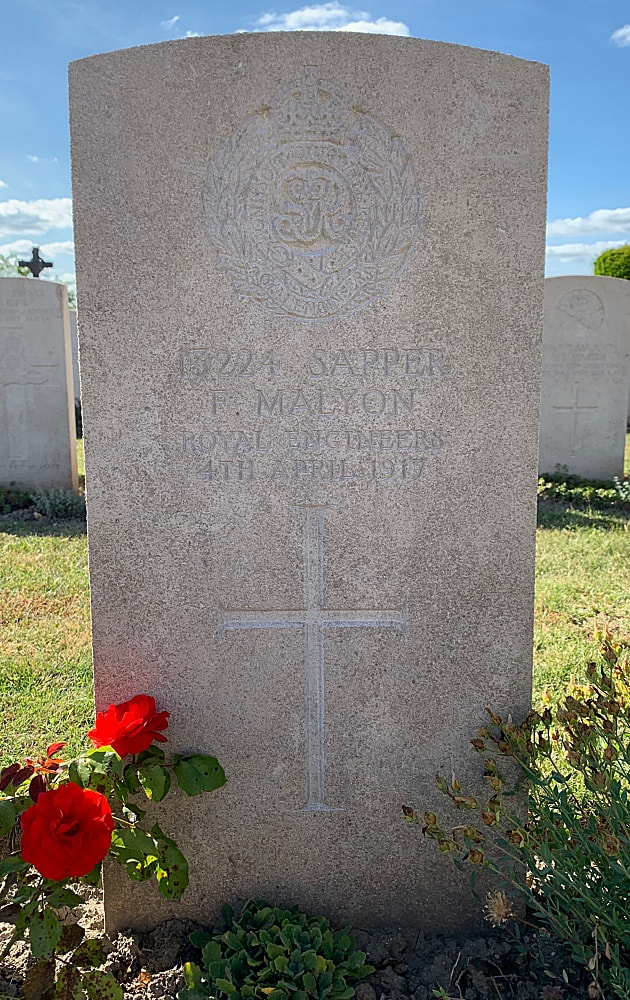 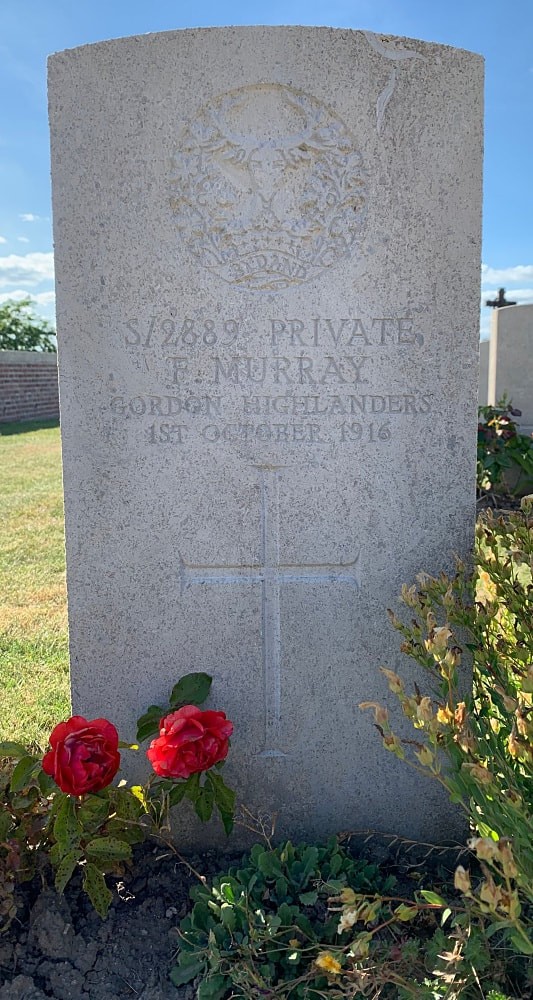 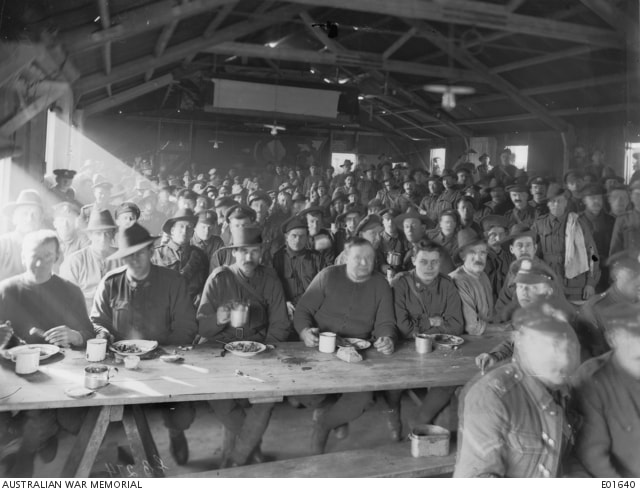 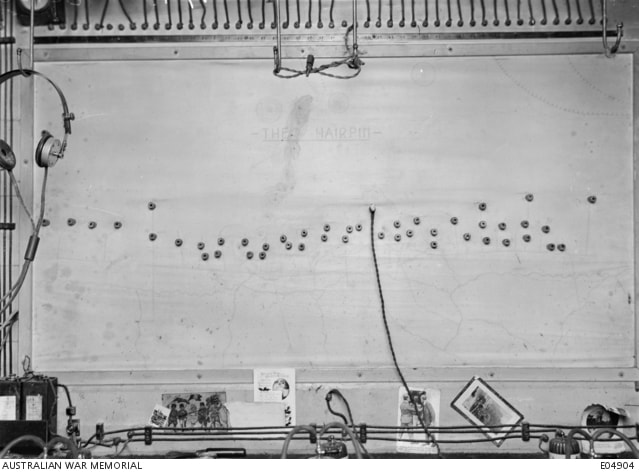 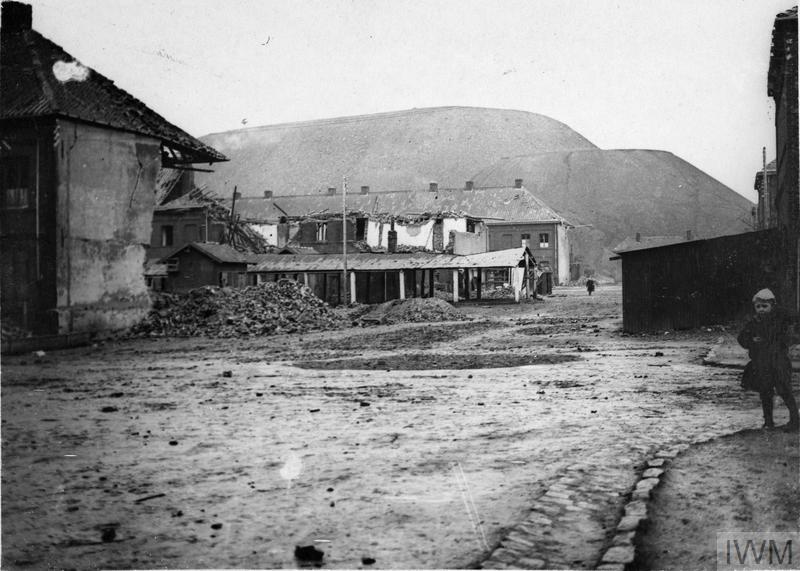 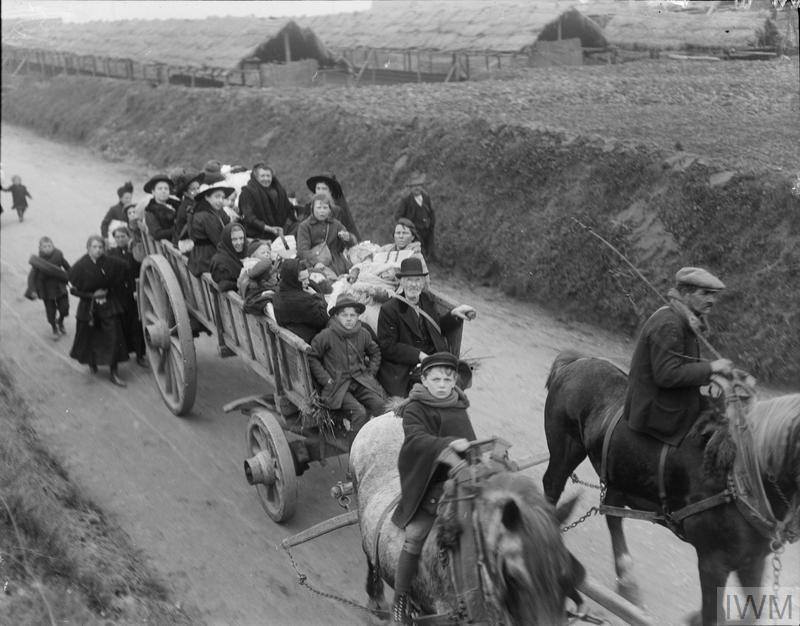 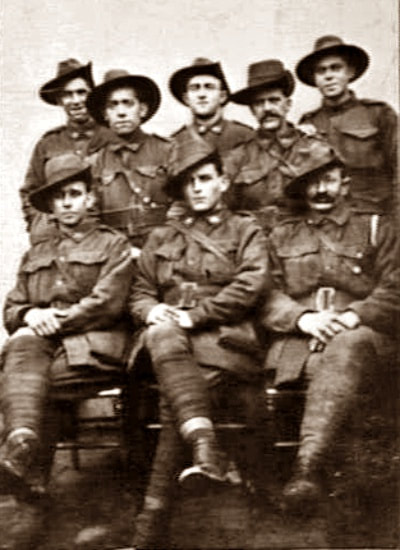 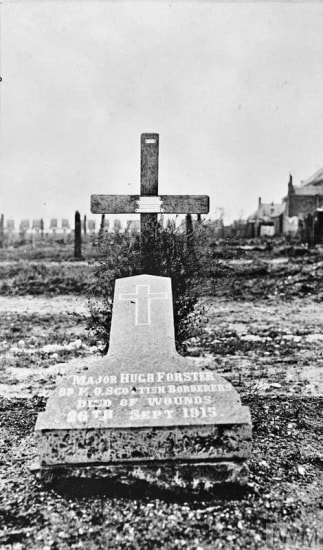 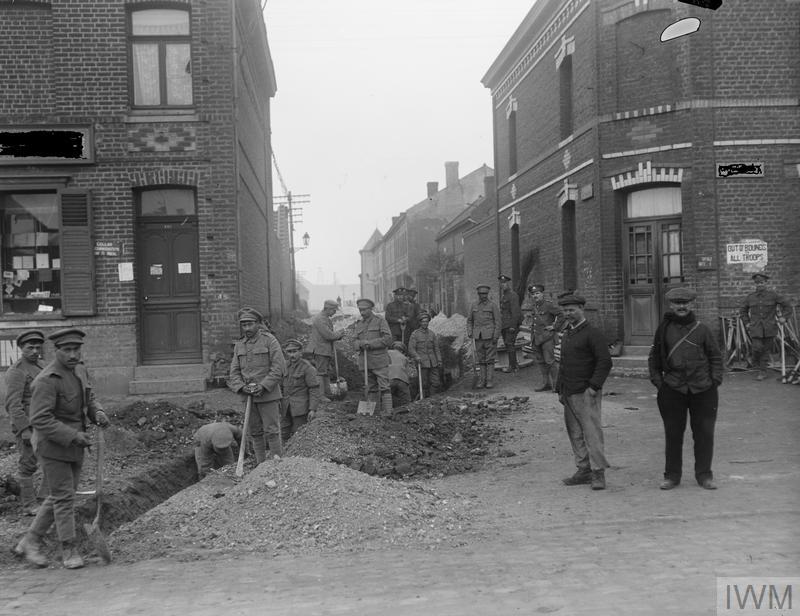 Portuguese and British troops digging a communication trench along a street in Noeux-les-Mines, 13 April 1918. Note signboards on houses giving details of billeting and cellar accommodation, unfortunately obscured by a censor. © IWM (Q 11587)