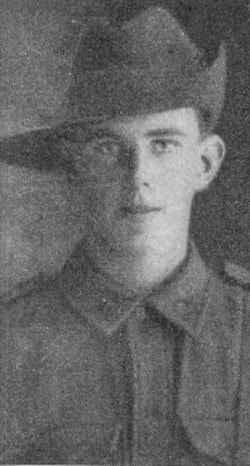 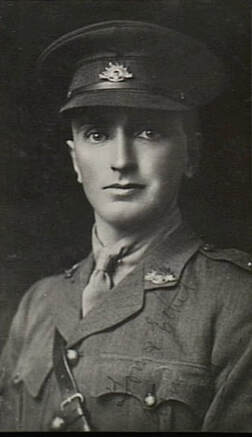 Studio portrait of Lieutenant (Lt) John Bonnily, 52nd Battalion, of Launceston, Tas. A farmer prior to enlistment Lt Bonnily initially enlisted as a Private (Pte) and, as such, embarked with the 11th Reinforcements 12th Battalion from Melbourne on HMAT Ascanius on 10th November 1915. After promotion through the ranks he graduated as an officer and was posted to the 52nd Battalion where, on 4th May 1918, he died of wounds received in action at Rouen, France. 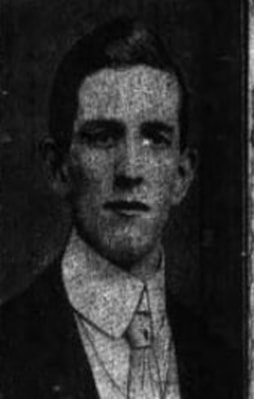 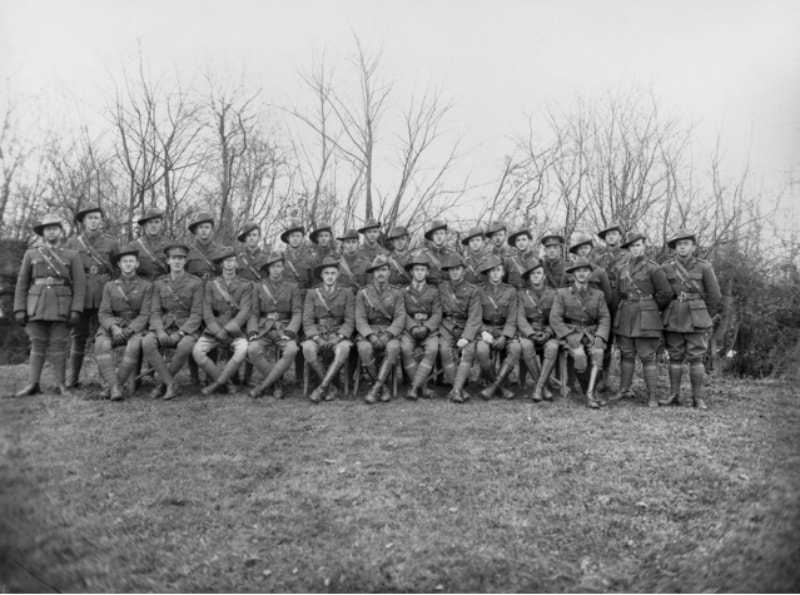 Group portrait of the officers of the 34th Battalion at Meteren.

Identified in the back row third from the left is Lieutenant Thomas Henry Britton, M. C. of 34th Bn. Australian Infantry, A. I. F. who died of wounds on 21st June 1918, aged 26. Plot B. 3. 2. Son of John and Elizabeth Britton. Native of Dublin, Ireland. 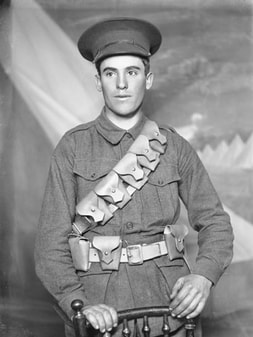 Inscription "Thy will be done"

Studio portrait of 3470 Private (Pte) Harold Thomas Burn, 22nd Battalion. A clerk from Geelong, Victoria prior to enlistment he embarked from Melbourne on 5 January 1916 aboard HMAT Afric for Egypt where he was transferred to the 57th Battalion and then to the 58th Battalion. He was promoted to Corporal in May 1916 prior to his battalion relocating to the Western Front, France. In early August 1916 he was promoted to Sergeant and then was commissioned as a Second Lieutenant (2nd Lt) on 30 August 1916. 2nd Lt Burn was wounded in action near Bapaume, France and was evacuated to No 8 General Hospital, Rouen, where he died of these wounds on 23 December 1916. 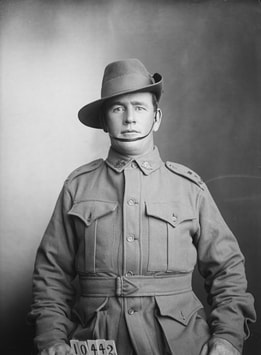 Inscription "Safe In The Arms Of Jesus"

Son of John and Jessie Campbell, of Numurkah, Victoria, Australia. 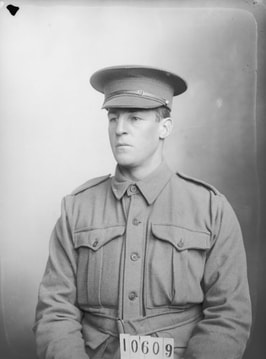 Studio portrait of 2905 Private (Pte) Stephen Albert Chandler, 9th Reinforcements, 8th Battalion, of North Williamstown, Vic. Pte Chandler enlisted on 9 July 1915 and embarked from Melbourne aboard HMAT Makarini on 15 September 1915. He was wounded at Pozieres, France, and died on 27 July 1916. Three of his brothers also served; two were killed in action. 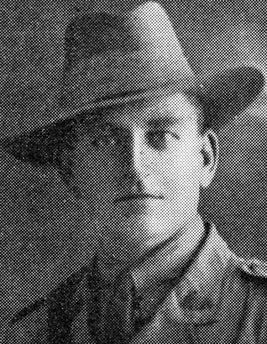 Inscription "A Man Amongst Men"

Studio portrait of 932 Private (later Lieutenant) William Urwin Clasper, 13th Battalion of Woolahra, NSW. An engineer prior to enlisting, he embarked from Melbourne aboard HMAT Ulysses (A38) on 24 December 1914. He was wounded in action (for the second time) on 11 April 1917 at Bullecourt, France and died of these wounds on 21 April 1917 at No 8 General Hospital, Rouen, France, aged 32. 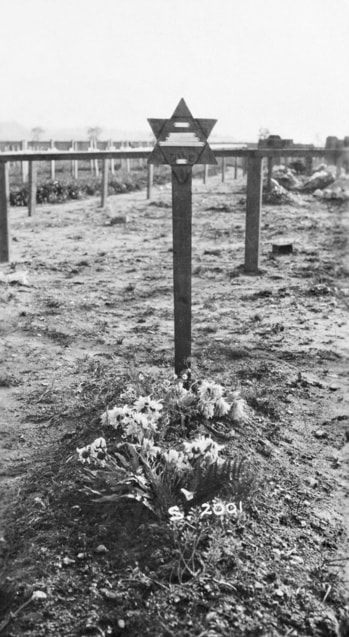 The original grave marker for 6476 Private Soloman Cohen, 4th Bn. Australian Infantry, A. I. F. who died of wounds on 22nd May 1917, aged 23. Plot Jewish, (At West end of Officers A). A. 5. (Served as COHN). Son of Michael and Ada Cohen, of 5, Northwold Rd., Stoke Newington, London, England. Inscription "Loving Memory Of The Only Son Of Ada Cohen Whom He Left Behind Broken Hearted" 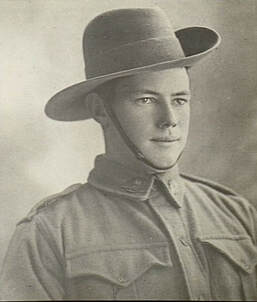 Inscription "He Died For Us" 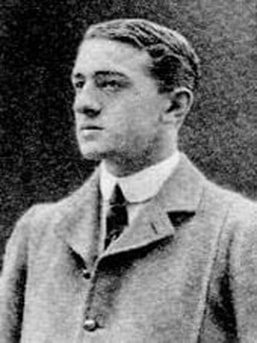 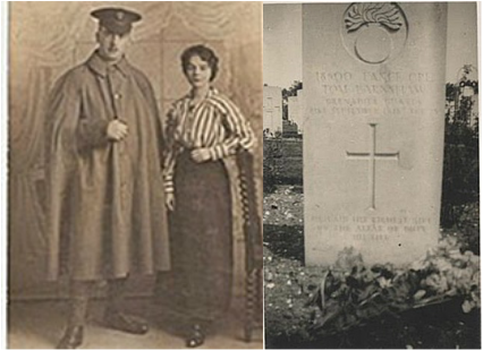 Tom is pictured above with his wife, Ada. The card below was written by Tom and sent to his brother, William.

​Son of Richard and Jane Edwards, of Bala, Merioneth.

​Edward Evan Edwards was born in the small township of Bala, in the depth of North Wales, on 12th February 1877. By the time that war was declared in August 1914 he had, quite literally, seen the world and had been stationed in Malta, Crete, Egypt, China, Burma and India.

His parents, Richard and Jane, lived at 2, Aran View, Llanycil, a mile from the town and situated on Bala Lake. His father was a solicitor’s clerk. The 1891 Census recorded that the family had moved to 26, Tegid Street, Bala and that Edward was a scholar – presumably at the local National School or similar. There was an elder sister, Ellen, and the family was complete with the births of Catherine, Richard and Jane.

Thirty-six new boys were admitted to Ellesmere College on 18th September 1891. Edward was allocated a bed in the ‘Harold’ dormitory and placed in Form Upper II under the instruction of Mr. G. Smith. There were one hundred and seventy-one boys on the nominal roll.

There are almost no records of the two terms he boarded at the college. All that can be found is that he played forward for two college rugby teams. At this early time of the college’s development, there were very few matches against other schools and so they organised ‘in-house’ contents. Edward played in both the “Welsh v. English” and the “North v. South” matches.

Edward left Ellesmere at the end of the Easter Term in April 1892, a few weeks after his fifteenth birthday. It is unlikely he continued with his education as in June 1893 he was employed as a ‘lad porter’ at Frongoch Railway station where he earnt the ten shillings (50 pence) a month. By January 1895 he was working at Corwen station as a lampman. His pay had increased by 50% to fifteen shillings (75 pence) a month.

On 1st November 1895, Edward signed his Attestation Papers at Wrexham. He was four months short of his nineteenth birthday, employed as a joiner, single and had seven years’ military experience with the Territorials. On signing the papers, he became Private Edwards, Service No: 4838 in the 2nd Battalion, the Royal Welsh Fusiliers.

He was on ‘home service’ until 7th July 1896 when he embarked for overseas service at the Malta garrison. A year later he moved to Crete and, after a year there, moved on to Egypt. He remained there for thirteen months before returning to Crete for a three month long posting. On 14th December 1898, he embarked for a three-year posting in China. Whilst there he was promoted Lance Corporal. He returned home on 24th March 1902 for the first time in nearly seven years.

On 16th August 1902, he extended his service to twelve years and he enjoyed nearly seven years of service at home. He was promoted Corporal on 5th December 1904 whilst based at Aldershot and Lance Sergeant on 16th January 1908. January 1909 saw him posted to Burma for two years and he was made full Sergeant on 18th October 1910. January 1911 saw him return to India. He returned home again at the end of January 1912, saw service in Dublin that autumn before being posted to Karachi. By now, postings in the tropics were catching up with him and he suffered several bouts of myalgia and rheumatic fever and it may have been that the only entry on his ‘Conduct sheet’ came about due to his illness. On 28th May 1912, he was formally reprimanded “for neglect of duty (failing to answer correspondence) and not complying with an order”.

When his period of engagement ended, he was described as being “Hardworking and sober, A good clerk”. His character was summarised “Very good” and he had been awarded two Good Conduct badges.

On 6th August 1914, he was “examined on mobilisation and found fit for service”.  With all his previous military experience he would have been one of the very first to embark for service in France – one of the ‘Old Contemptibles” as the regular army of the time became known. His medal card has survived and shows that he embarked for overseas service on 22nd August. Taking his age and experience into account it is most likely that he served at the Infantry Base Depot. For his wartime service he was awarded the Victory Medal, the British War Medal and the 1914 Star. He was also awarded the China Medal for his involvement in the Relief of Peking.

Sergeant Edward Edwards, 2nd Battalion, the Royal Welsh Fusiliers, died of pneumonia whilst an in-patient at No. 12 General Hospital, Rouen on 17th May 1915. He was thirty-eight years old and was buried in St. Sever Cemetery, Rouen. His brother, Richard Tegid, was named as his sole legatee. 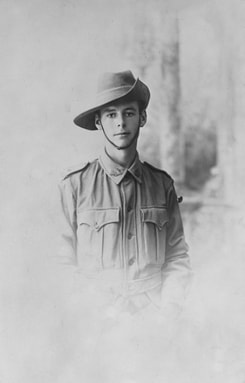 Studio portrait of 1256 Private (Pte) Roy Henry Farrell, 1st Reinforcements, 26th Battalion, of Lunawanna South, Burnie Island, Tas. A labourer prior to enlisting on 17 May 1915, he embarked from Brisbane aboard HMAT Aeneas on 29 June 1915. Pte Farrell served on the Gallipoli Peninsula and afterwards in France, where he died of wounds at Rouen, France, on 20 August 1916, aged 22 years. 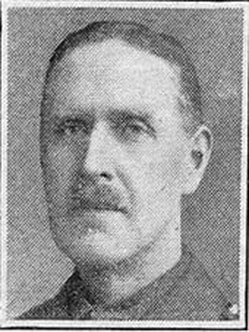