Wanquetin is a village approximately 12 kilometres west of Arras and approximately 6 kilometres north of Beaumetz. Wanquetin Communal Cemetery Extension lies to the north-east of the village on the road to Warlus (D.59).

A few burials were made in the communal cemetery from March to November 1916, but in October 1916, the 41st Casualty Clearing Station came to the village, and by the end of November it had become necessary to begin the extension. The last graves made in the cemetery were those in Plot II, Row E, where 23 men of the 3rd Canadian Machine Gun Battalion, killed on 24 September 1918 in a German daylight air raid over Warlus, are buried.

The extension was designed by Sir Reginald Blomfield. 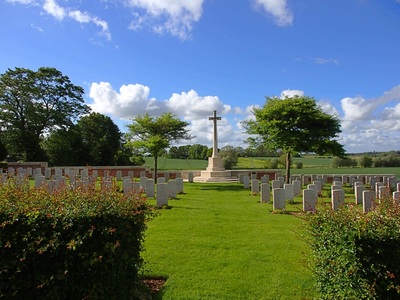 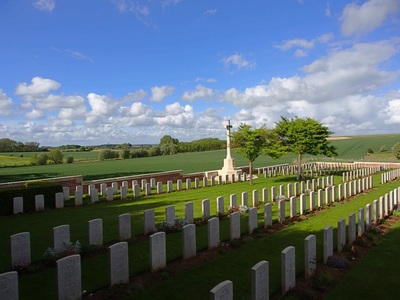 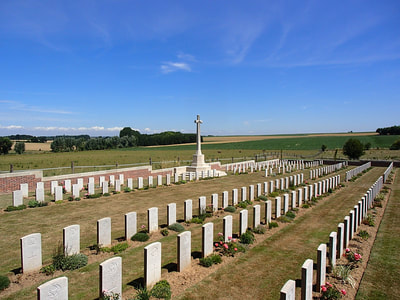 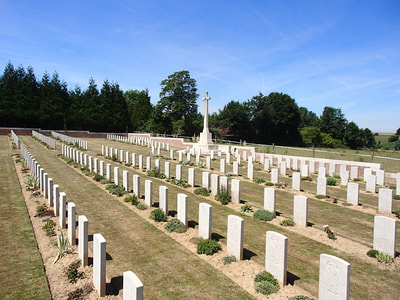 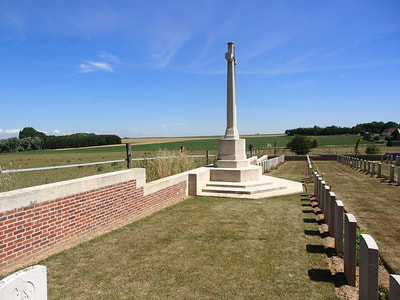 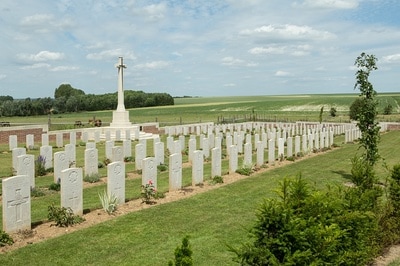 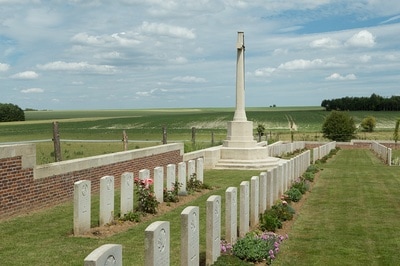 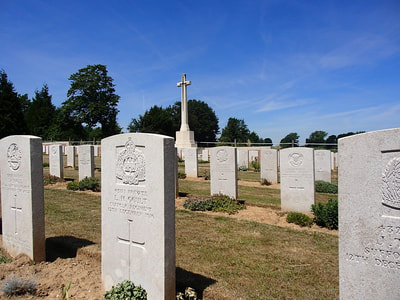 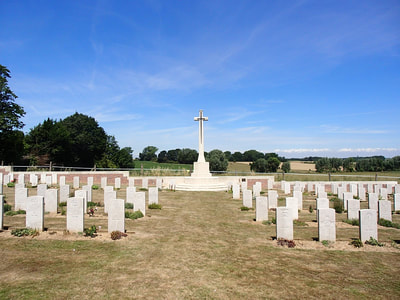 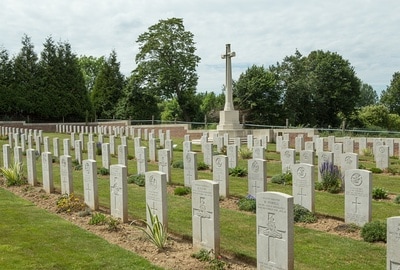 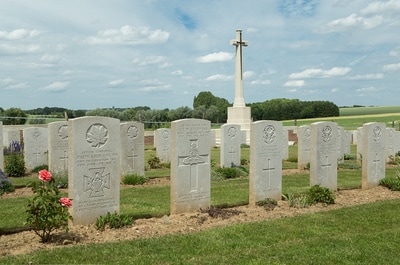 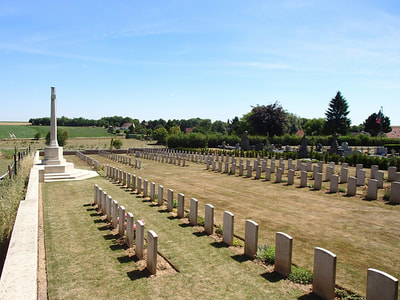 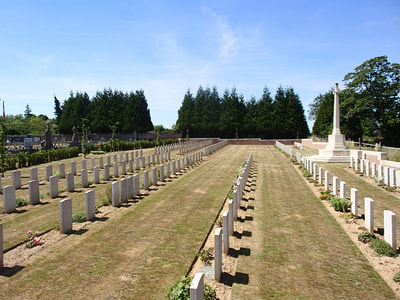 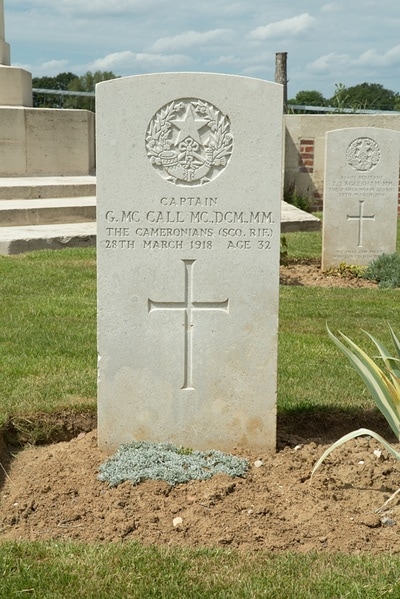 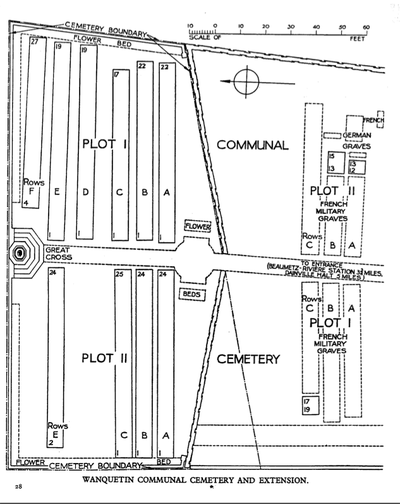 Citation: The following extract is recorded in the London Gazette Supplement No. 30903, dated 16th September, 1918:- "For most conspicuous bravery and extraordinary devotion to duty when in charge of a Lewis gun section in the front line trenches, in which a strong enemy raid was attempted. During an intense bombardment Corporal Kaeble remained at the parapet with his Lewis gun shouldered ready for action, the field of fire being very short. As soon as the barrage lifted from the front line, about fifty of the enemy advanced towards his post. By this time the whole of his section except one had become casualties. Corporal Kaeble jumped over the parapet, and holding his Lewis gun at the hip, emptied one magazine after another into the advancing enemy, and although wounded several times by fragments of shells and bombs, he continued to fire and entirely blocked the enemy by his determined stand. Finally, firing all the time, he fell backwards into the trench mortally wounded. While lying on his back in the trench he fired his last cartridges over the parapet at the retreating Germans, and before losing consciousness shouted to the wounded about him: "Keep it up, boys; do not let them get through! We must stop them !" The complete repulse of the enemy attack at this point was due to the remarkable personal bravery and self-sacrifice of this gallant non-commissioned officer, who died of his wounds shortly afterwards." 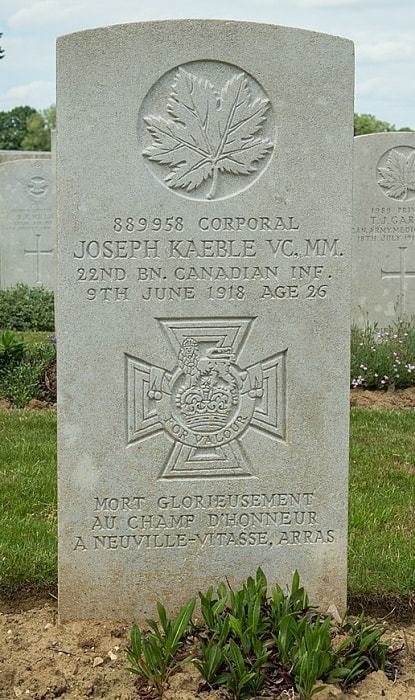 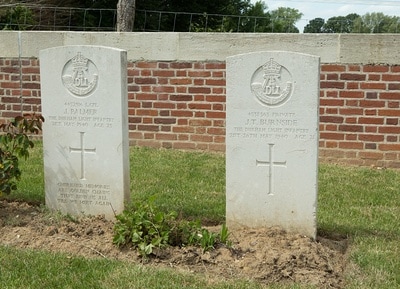 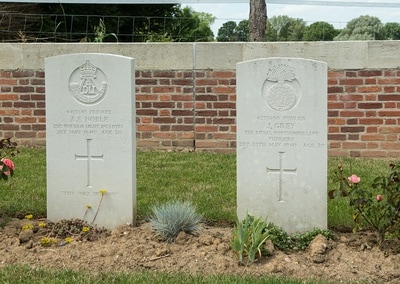 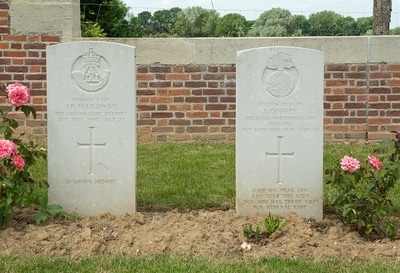 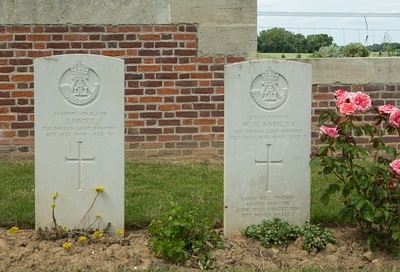 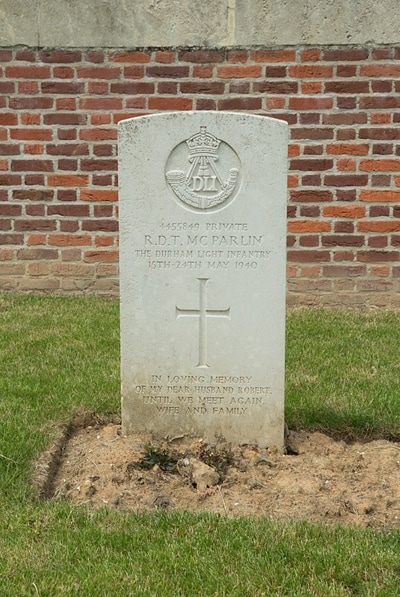 10930 Private Joseph Ferguson, 1st Bn. Royal Scots Fusiliers, attached Royal Engineers, executed for desertion 20th April 1917., aged 21. Plot I. C. 13. Son of Mrs. Theresa Ferguson, of 16, Brook Street, Dundee. He was a young Regular, with little pre-war service, who arrived in France in September 1914.  In 1915 Ferguson was wounded & returned to England.  Following recovery he was convicted of several offences of deception (his sentence is not known), & returning to France, deserted twice.  In October 1916, & now serving under 2 suspended sentences (one of death), he deserted again.  Ferguson was arrested in January 1917 at Ribemont, where he was sporting the Distinguished Conduct Medal & the Legion d’Honneur, together with an armful of wound-stripes.  (Putkowski,pp.170-172) 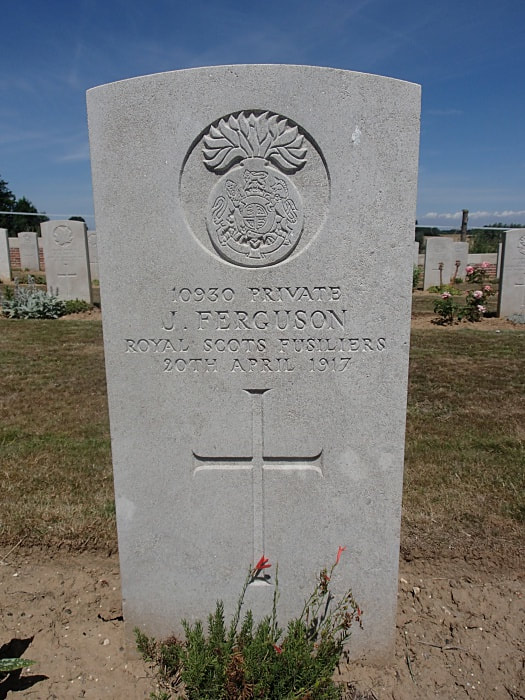 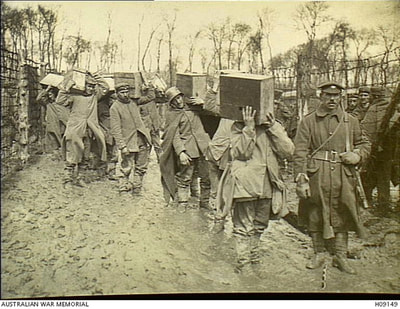 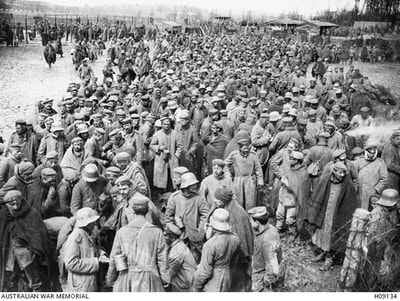